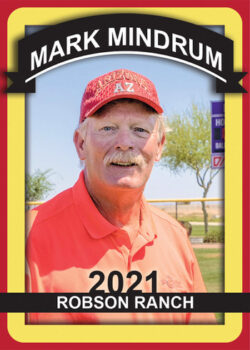 Mark Mindrum was born in Hamilton, Ohio, near Cincinnati, and lists players such as Pete Rose, Johnny Bench, and Joe Morgan as his favorite players growing up. He also says his mom was his biggest baseball influence. “She would play catch with me and throw batting practice,” x Mark says. “The Reds were her team and I used to drive her crazy throwing a rubber ball against our brick house for hours pretending to be an infielder for the Reds.” Mark suffered the heartache of losing his mother when he was in high school. As the eldest child, he assumed responsibility for his younger siblings. “My mom was, and continues to be, my inspiration.”

Later, in high school, Mark would have an unusual distinction as being a five-year letterman. “Yes, I played as an eighth-grader. Coach had to fudge a few things but he got me on the team.” Mark also saw duty on his high school team throwing batting practice as a lefty. “I’m naturally right-handed but coach saw me messing around throwing left-handed in practice and told me to get on the mound, as we were going to face a south-paw the next day.”

As an adult, Mark became interested in umpiring and attended the Little League Umpiring Clinic in San Bernardino, Calif., which was the headquarters for little league in the western states. This eventually led to him becoming the chief umpire for Carson City, Nev., including all league play and tournaments. With aspirations of trying to become a major league umpire, Mark also attended Major League Umpire clinics, but found that marriage and parenthood duties took precedence.

Mark first played summer fast-pitch softball in Minnesota. After moving to Nevada and graduating from college, Mark began playing slow-pitch. However, umpiring replaced softball as Mark needed to earn extra money to support his family. “It had been around 33 years since I played softball when I started playing at Robson Ranch. I lived at Mission Royale but since there was no team there at that time, I was welcomed in by the Robson guys. To get another chance to play the game you love at an older age is like a big bowl of gravy on top of your mashed potatoes.”

Mark has been and continues to be an important part of the Softball Club. He has held one of the most important positions in our club for five years, that of our CHO (Chief Hydration Officer). This position is more commonly known as “Fridge Boy.” Mark has set a high standard at that position, and while he has officially resigned, he is currently breaking in a new crew for the job. If you haven’t figured it out yet, the softball boys like to enjoy a cold one after exerting major (or minor) efforts on the diamond. Sometimes referred to as tailgating, we value our social time, and having a well-stocked refrigerator is a necessity. The club appreciates and thanks Mark for his service and wish him many more years of softball camaraderie.