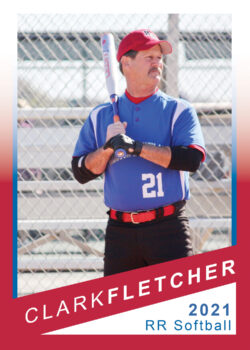 As a youngster growing up in La Palma, Calif., Clark Fletcher was first exposed to baseball by shagging balls for his older brother and attending his games, and listening to his dad give him instructions on fielding and hitting. As soon as he was old enough to play, Clark had the unenviable task of riding his bike six miles to and from the little league facility.

“It was a two-lane highway and could be pretty scary. Especially trying to make a left turn,” Clark remembers. “We had really nice grass fields but the first uniforms were a tee shirt and a hat. Everyone wore jeans until we got to the next level.”

Receiving his first full uniform Clark had to ask his older brother how to wear the pants since the legs only reached just below the knee.

After a short time of playing softball after high school Clark soon found himself coaching the teams his children were playing on. One particularly memorable game Clark recalls is when both his 12-year-old son and 10-year-old daughter were playing against a team loaded with all-stars.

“We were behind 25 to 2 and they had hit 10 or 11 home runs. I had gone through all the pitchers I had when my four-foot tall, sixty-pound daughter asked if she could pitch. I do not think she was aware that their numbers 2, 3, and 4 hitters were due up but I was certainly aware. My son who was catching gave me little reassurance when he said, ‘she can’t do any worse than everyone else.’ Despite the other team making fun of her while she was warming-up she dispatched the first hitter on one pitch when he hit a sharp grounder back to the mound. The second hitter hit a soft ground ball to second base for out number two. The third batter in the inning was their clean-up hitter who already had three home runs in the game. On the first pitch he hit a laser-like one hopper back to the mound and was out at first before he left the batter’s box,” Clark explained.

“Seeing the game from a player’s perspective and learning the rules was a major motivation,” Clark said.

Success followed as Clark was honored by being asked to umpire the state Little League championship game. He also moved up the age-group ladder to umpire in high school games and even as far as Division 1 NCAA college baseball.

Those of us in the Softball Club value Clark as an important member who makes great contributions to the success of our club. As a player, Clark is a steady and reliable defender as well as a dangerous hitter to the opposition. Off the field, Clark contributed his carpentry skills in our new scorers’ tower and snack shack. Clark also participates by coaching and helping with various work projects at the park. Everyone considers Clark a first-class teammate that always has a smile and something positive to say. Thank you, Clark for all you do.