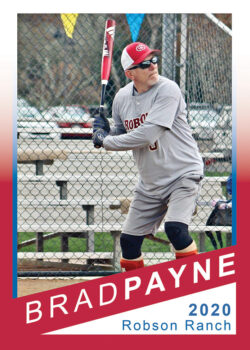 It is little wonder that Brad Payne is a lifetime St Louis Cardinal fan. Born in Olney, Ill., a little over 100 miles from St Louis, the youngster soon found his favorite player, Lou Brock, the long-time left fielder for the Red Birds. Although Lou hit left-handed, Brad fashioned his right-handed batting style to emulate the Cardinal outfielder, including his classic “closed” stance and smooth swing. In addition to faithful Cardinal fans, Olney is well-known for its population of white squirrels. Not a very remarkable claim to fame, but a small town seeks notoriety where it can find it.

Crest Hill, Ill. was where Brad was introduced to organized baseball, playing in the Bronco league under the tutelage of coach Don Phelps. “He truly believed in my ability and put me in key positions on the field and in the batting order. At a time when most coaches were yelling, screaming, and demeaning he was always encouraging.” Brad enjoyed success playing in this atmosphere, and when selected to the All-Star team was able to make the transition from short-stop to left field. “I had never played outfield prior to that, but thanks to the support and encouragement of coach Don I ended up as the starting left fielder.”

Brad also received help from home with his old and baggy little league uniforms. “Fortunately, my mom sewed, so she was able to repair the tears and make them fit somewhat reasonably. The oldest kids always got the first pick so we had to take what was left.”

Softball became an activity for Brad after moving to Ottawa, Ill. “I started playing in a league that played with a fourteen-inch ball.” Playing for five years until the team folded, Brad was recognized in the local paper for finishing second in batting, but when the statistics were published, they got his name wrong. “They called me Ed.”

Working for the Nuclear Regulatory Commission, Brad joined the softball team and had the memorable occasion to play on a team that included his son. “He was home on summer break from college and joined our team.” Brad remembers. “I got to see him hit a massive home run that shattered a car window.”

Brad never had intentions to play softball at Robson Ranch, but decided to give it a try after being encouraged by Paul Gayer. He soon found an important activity and a welcoming group of guys to bond with. Brad earned the nickname Big Hit Brad playing with the Robson summer team against a team from Sun Lakes. “We were rallying from six or seven runs behind with two out in the final inning. I got a solid hit that split the outfield gap and drove in the tying run. We won the game and the nickname was granted permanent status.”

“My favorite thing about the softball club at Robson Ranch is the comradery, support, and encouragement of everyone in the club. Just hanging out with the guys always brightens my day.”

Brad has brought a valuable and important personality to our club. His willingness to get involved has resulted in him coaching both league and tournament teams, organizing practices, and assisting with various club activities, including currently serving as vice president. In addition, Brad is a solid player in the field, an offensive threat at the plate, and the kind of teammate who makes you proud to take the field with.