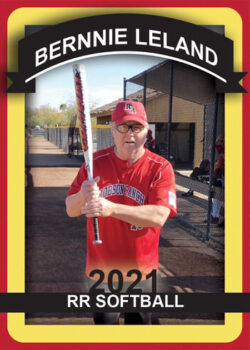 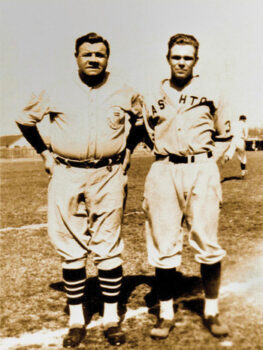 Like many other young men, Bernnie Leland enjoyed listening to his grandmother tell stories about his father. His father’s story, however, is quite unique. While still in high school, he was recruited to play shortstop on the city men’s team from Cashton, Wis. In 1938, that same team took up a collection to send this high school star to Mississippi where baseball legend Babe Ruth was holding a summer baseball camp. His aunt gave him some money that he used to buy a ball glove and he was on his way. Bernnie summarizes the story, “Dad did play in the St. Louis organization, but then the war came and that was the end of that.”

As you might suspect his dad became Bernnie’s little league coach. “I played pitcher, third base, and outfield,” says Bernnie. “My dad taught me how to throw a fastball and a curve. My dad was also my high school coach and we won the district championship in my junior year, but lost in the regionals.”

High school years were a busy and enjoyable time for Bernnie in North Branch, Minn. “I played all the sports I could, including football, basketball, baseball, and golf.” It was golf that particularly appealed to the youngster. “I basically grew up playing golf on a par 32 course at the edge of our hometown. The club house was a shack with just a screen door to keep out the mosquitos. Green fees were two dollars and you would put the money in a box nailed to an oak tree by the first tee. However, the men let us play for free.” Golf continued to be the primary sport for Bernnie as an adult. Perhaps his proudest moment came in 2006 when he won the  Tournament Players Championship at Rivers Bend in Maineville, Ohio.

College at the University of Minnesota was next for Bernnie after high school, followed by military service in the army, serving as a commissioned officer at a missile site in West Germany during the Vietnam conflict. Following graduate school at Iowa State University, Bernnie was hired by Procter & Gamble and sent to Asia for five years, building plants for consumer products. One plant, near Ho Chi Minh City, Vietnam, was particularly eerie for the former U.S. Army veteran, especially when on his first tour of the property, he was informed by the site manager that they had just cleared the property of landmines the day before.

Bernnie had his first softball experience right here at Robson Ranch in 2013. “I noticed the softball field and dug out my old glove. The glove was so old I promptly broke the leather webbing.” Bernnie remembers. “What I enjoy most about Robson softball is the camaraderie—all the guys are so supportive of one another.” Bernnie wishes to thank his wife, Karen, for her support, “she comes to games and tournaments, she even has bandages in her purse to help if I get scraped. She is also tolerant when I keep buying more bats.” You can’t get any better than that.