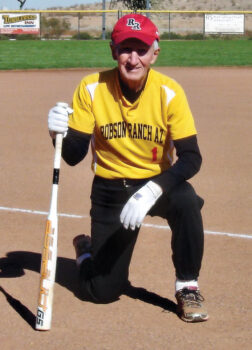 Trying to profile what Artie Wachter accomplished as a soccer player in 500 words is nearly impossible, not to mention his years of refereeing and coaching at the international and professional level. Once you add tennis, bowling, pickleball, golf, and over 30 years of softball, you begin to realize what a remarkable man we have among us.

Meeting with Artie in his home, the first thing he showed me was not his Colorado Soccer Hall of Fame plaque or his National U.S. Adult Soccer Hall of Fame award. Instead, he showed me a small trophy he won in the early 1940s for B league basketball in New York City. It was there that Artie learned how to compete in street games like stickball, punchball, and stoopball. He also learned to holler “chicky,” which meant the cops were coming—get out of the street!

Organized soccer for Artie was first played in New York as part of the German American Club. Artie showed newspaper articles about his games but since they were all written in German, he couldn’t read them. Ironically, years later while serving in the Air Force and stationed in Germany, Artie was the only American to play on a team in a highly competitive league that included teams from East Germany. Later in his military service, he was the only American on an all-Scottish team in Canada. He showed a picture of him and his father who also joined the team for a game and was allowed to play on the same field as his amazing son.

By the early 1960s, Artie was officiating college soccer and was soon working in professional games including the 1967 National Championship game. The North American Soccer league made use of Artie as an official from the late ’60s all the way to 1980. Artie became the Director of Soccer Officials for the state of Colorado in 1974 and served in that capacity for over 20 years, refereeing numerous high school play-off and championship games.

One important memory during his officiating years took place in his home state when he walked out of the tunnel at The Meadowlands to find a crowd of 76,000 people. Glancing into the stands, he spotted his wife Dixie and gave her a subtle thumbs up.

“One of the most amazing things that ever happened to me,” Artie commented.

Another amusing event took place when a coach tried to get Artie to look at a replay on a battery-operated television he was carrying on the sidelines.

“He was quite upset when I refused,” said Artie.

Artie first played fast-pitch softball in 1951 while in the military. Senior slow-pitch softball later became part of his life including teams in Colorado, California, Florida, and Idaho. He became the senior member of the Robson Softball Club in 2014 and has amazed all of us in the club with his can-do attitude, his zest for life and sport, and his will to win. When asked what he liked most about senior softball, his reply was simple.

“It keeps you feeling young again and very competitive,” he said.