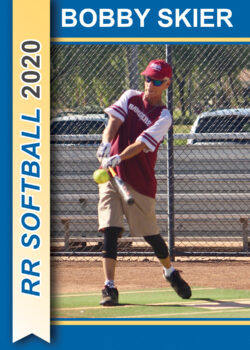 Bobby Skier’s story is one of “dedication and perseverance.”000

Bobby Skier says his story is one of “dedication and perseverance.” Having four surgeries in nine years including both left and right rotator cuff repair, arthroscopic knee surgery, and just last May, lower back surgery. He credits lessons learned in Air Force flight school, beginning with the mantra “you never give up.” Despite his recent surgery, Bobbie is proud to say he did not miss any games in the 2019-20 softball season. He also pointed out that he plays without any pain medication.

Born in the lower east side of New York City, Bobby first learned to love baseball watching his favorite team, the Brooklyn Dodgers. Watching their third baseman Billy Cox turn in dazzling plays at third base inspired Bobby to make that his position, a position Bobby still plays today. Playing in the NYC Police Athletic League, young Bobby was struggling to hit the ball. A natural right hander, his coach moved him to the left side, where he hit the first three pitches. “The rest is history,” says Bobby, and he still hits lefty today.

Softball became part of Bobby’s life in the Air Force, where he proudly served during the Vietnam conflict. During his twenty-year Air Force career, playing softball on a regular basis was difficult because of the travel involved with his job. Fortunately, for Bob, he was almost always able to play third base, “not necessarily because I was so good but because no one else wanted to play there.” The same thing was true of playing softball during his fourteen-year career with the Department of Energy.

Full-time softball did not become a reality until 2008, when Bobby and his wife Karen moved to Robson Ranch (RR). He credits Karen for her continued support of his love of playing the game throughout the 52 years of their marriage. Bobby is proud to say he is one of only two active softball players from the original Robson Softball team organized and coached by Paul Lewinski. He is also proud to be the only RR softball player with a Ph.D. but admits “Unfortunately, the advanced degree does not help my batting average one iota.”

Bobby credits his time in the gym for much of his longevity on the softball field. “You can find me every day in the fitness center, strengthening my core and leg muscles. Twenty minutes of cardio and a lot of stretching as you can see, I have no interest in becoming a ‘mouse potato.’”

A man of faith, Bobby says “I get plenty of help from the good Lord. Prior to each game I say a short prayer, not for victory or that I go four-for-four hitting, but I pray to keep my team-mates, myself, and the opposing players injury-free.”

We are grateful to have Bobby Skier as part of Robson Softball Club and wish him continued health and participation in the game.