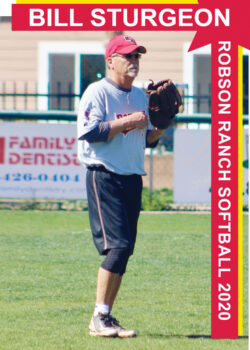 Bill Sturgeon’s softball experience at Robson Ranch began within days of moving into the community in 2015.

“I was like a little kid peering through the fence watching a bunch of old guys practicing. Jim Duran was the first to come over and invite me to join in,” Bill said.

Even though it had been 36 years since he last played, he was an enthusiastic convert to the world of senior softball. His lack of playing was quickly evident.

“I blew out both quads and had nagging injuries the entire first year.”

This was an interesting and successful year that included a league championship and another first-year Robson softball player named Ron Hunt.

Long before softball at Robson Ranch, Bill was a baseball fan growing up in Bellevue, Neb., just south of Omaha. Starting at age seven or eight he and his father would go to the college world series in Omaha every year.

“That’s what sparked my interest in college sports and especially Arizona State University baseball as they were major contenders in the tournament”, Bill said.

It was also here that he first watched his favorite player, Sal Bando, play third base for the Sun Devils. ASU won the 1965 College World Series championship and Sal Bando was named MVP. Bill recalled that Sal Bando went on to play for the Oakland Athletics and was their team captain when they won three consecutive World Series in ’72, ’73, and ’74.

Like many others of his generation, Bill’s early experience with baseball was “down at the neighborhood park where we made do with hand-me-down gloves and bats.” Bill had an important mentor in his best friend’s father who would take the boys to the high school ball field and hit grounders to them almost every weekend in the warm summer months in Nebraska. Playing little league, Bill found himself in the line-up as the starting second baseman and lead-off hitter.

“I hit lead-off not because I was a good hitter, but I had a knack for getting hit by the pitch. Also being a somewhat small kid, I was hard to pitch to and drew a lot of walks,” Bill recalls.

Summer baseball at the American Legion level was the only option to play baseball for the teenagers in Bellevue because the high school did not have an official baseball program. Bill excelled in other sports during his teen years—wrestling and football. His wrestling accomplishments were truly remarkable, winning two Nebraska state high school championships and scoring back-to-back state titles in his junior and senior year which earned him recognition as one of the top fifty high school wrestlers in the U.S. in his senior season. In football he played running back and outside linebacker.

When asked how participation in baseball and other activities influenced the adult version of Bill, he responded confidently.
“Although one doesn’t realize it at the time, and beyond the obvious health and fitness benefits, baseball and other sports help develop life skills like self-esteem and a sense of belonging,” Bill said.

Bill has and continues to prove himself both on and off the field as an important asset to the Robson Softball Club. He has worked hard to promote selling and maintaining advertising banners on the outfield fence which is a major funding source for our club. For the last several years, Bill has also served as the Softball Club tournament director. This important job requires him to be in charge of home tournaments for “B” and “C” teams, as well as finding outside tournament opportunities for both the “B” and “C” teams, giving them the opportunity to play at other senior communities.

The Robson Softball Club appreciates and says thank you to Bill for all he does and we wish him continued good health and many more years of good softball.