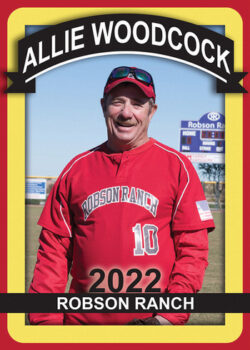 Because his father was a prolific boxer and had no love for team sports, Allie Woodcock was first encouraged and instructed in the pugilistic arts. Soon, other boys in their Norfolk, Va., neighborhood were showing up for instructions and sparring sessions. When neighborhood mothers became aware of what their youngsters were dabbling in, the activity was doomed. “My dad then taught me golf,” recalls Allie.

With three older sisters, Allie’s first baseball experience was associated with the boys who started coming around to visit. “By then we were living in Bowie, Md., and we would play catch in the street or have a pickup game in a nearby field. When we were hanging out at our house, we watched the Baltimore Orioles on television. Boog Powell and Brooks Robinson became my favorite players,” Allie says.

Organized baseball first became a reality when Allie got involved with the local Boys Club. “I was quite tall for my age, so I made a good target at first base. I was also a decent outfielder and could pitch a little,” he says. Playing with the Boys Club would continue until he entered junior high school. “My first year of junior high I played soccer and wrestled with the intent to try out for the eighth-grade baseball team. However, something quite unexpected happened before that season. All my friends who I had played ball with were suddenly giants! My growth spurt had come to an end and theirs were kicking into overdrive. I did try out that season, but when Artie Vogel threw a fastball by me that I never even saw, I knew my baseball days were over.”

Years later, while serving in the Coast Guard, Allie found softball as an activity he could get involved in with his unit. “Most units had teams, and we would play them as well as other local military or first responder teams.” Allie recalls one particular tournament while stationed at Grand Isle, La. “We had put together a softball team and decided to enter a tournament ‘up the bayou’ with some local fire, sheriff, and police department teams. I remember looking at the opposing teams and thinking ‘if I were to design the perfect softball team, this is what they would look like.’ They were all big, strong, and fast, and we lost badly.”

After Allie and his wife, Karen, moved to Robson Ranch, Allie began to get involved with softball again, first by joining Artie and Dixie Wachter in their Saturday development league. “I discovered a new passion for the sport and a genuine desire to improve. When I was able to achieve full retirement, I committed to playing on the competitive teams and have been playing ever since. It has been a great time. I can honestly say I have never been better coached, better motivated, or learned more about the game than here at Robson Ranch. I fully intend to play until they carry me off the field on my shield.”