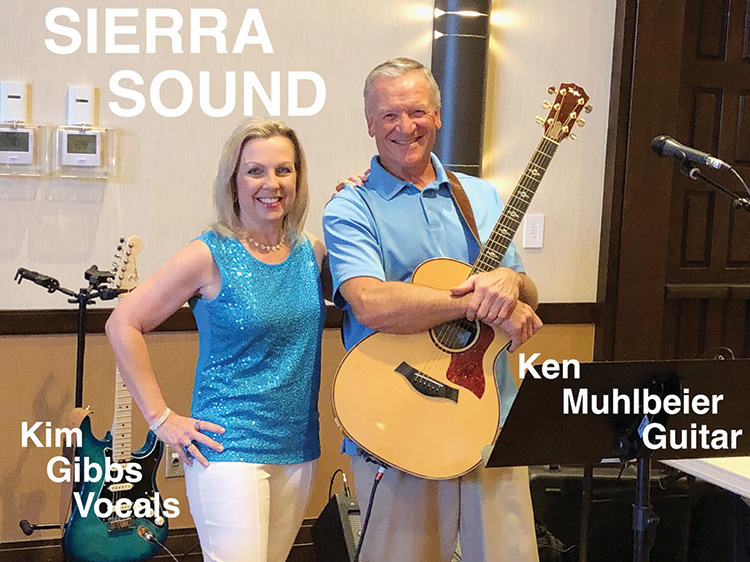 Sierra Sound is made up of guitarist Ken Muhlbeier and vocalist Kim Gibbs. Both Kim and Ken are long-time residents of Robson Ranch. They have been entertaining audiences in the Tack Room and outside on the Hermosa Ballroom Patio for the past five years. They also have played for several parties and dances in the ballroom and have performed at several venues in Casa Grande and surrounding areas. Some of these include The Gathering, Tommy’s Bistro, Palm Creek RV Resort, SaddleBrooke Ranch Bistro, Duffers Sports Bar and Grill, The Thirsty Donkey, and downtown Casa Grande at the Food Truck Festival. They play a wide variety of music including pop, soft rock, and country.

When COVID-19 hit in March, they sadly had to cancel several gigs, including a birthday party and a neighborhood block party for Robson residents.

In preparation for the fall/winter/spring season, Kim and Ken work on new songs for you all summer long, despite the fact that Kim is in Pennsylvania and Ken stays in Arizona. How do they do that you ask? Ken creates his own backing tracks for their music and emails them to Kim once completed. This allows her to be able to rehearse on her own while they are apart. Ken will rehearse them as well so that when Kim returns to the Ranch in early October, they will be ready to perform. Both old and new songs are rehearsed over the summer as they have all the songs recorded on an iPad.

They are both looking forward to the upcoming season and can’t wait to see all of you again soon!

You can follow them on Nextdoor on the group page under Sierra Sound on Facebook at sierrasoundeloyaz, and on YouTube at Sierra Sound Casa Grande AZ.