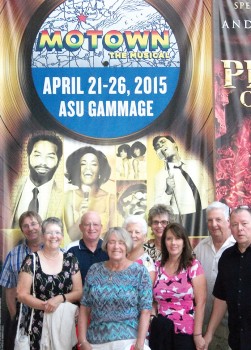 On Tuesday evening, April 21, 2015, 34 members of the Show-Goers Club attended opening night of Motown the Musical at ASU Gammage in Tempe, AZ. Motown the Musical has been called a “Broadway jukebox musical” because 60 songs highlight this show. With a book by Berry Gordy based on his 1994 autobiography To Be Loved: The Music, the Magic, the Memories of Motown, the musical is based on the story of Gordy’s founding and running of the Motown record label and his relationships with Motown artists such as Diana Ross, Smokey Robinson, Marvin Gaye and Michael Jackson. The music and lyrics for the musical are taken from selections from the Motown catalog. The musical premiered on Broadway in April 2013 and it received four Tony Award nominations. Club members were also favorably impressed by the show’s music.

Show-Goers is a chartered club at Robson Ranch and has over 100 members. The purpose of the club is to provide opportunities for members to enjoy the performing arts. The club does not collect dues, but members are required to coordinate or co-coordinate a show every three years to maintain their good standing in Show-Goers.

Currently Show-Goers is completing the current performance arts year, which ends in August. However, the 2015-2016 calendar is beginning to fill up, and the following shows are currently scheduled and ticket orders are being taken for: