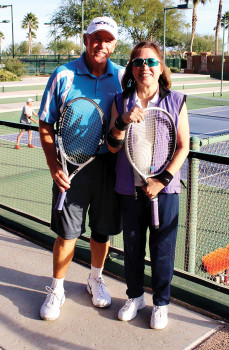 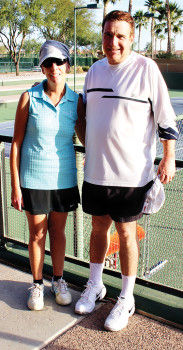 Who would have believed that the first day of the second annual tennis tournament would result in a rain delay? That’s exactly what happened this year. With a 100% chance of rain in the forecast for Saturday, December 13, all participants prepared themselves for a rescheduled date for men’s and women’s doubles play. The mixed doubles matches were played on the scheduled date, Sunday, December 14; men’s and women’s matches were rescheduled for Saturday, December 20.

The courts were filled with 3.0 and 3.5 matches all afternoon on Sunday. Players from Sun City Anthem in Florence, Mission Royale and Palm Creek from Casa Grande, and Robson Ranch competed for the top two spots in the tournament. Each match consisted of one set to nine with a Koman tie break; each team played minimum of two sets. Most of the courts ended up playing a Koman tie break, and some of the teams played three sets that afternoon. With the sun setting, the winners were finally determined.

On Saturday, December 20, the men and women got ready for some very competitive matches. With the same format as mixed doubles, the teams battled it out on all four of the courts all day long with men starting at 9:00 a.m. and women immediately following. The champions and finalists for the women’s doubles were two teams from Mission Royale. The men’s champions were from Anthem, but the finalists were the Robson team of Jim Matheney and AZ Azaria.

Congratulations not only to the champions and finalists but also to everyone who participated. Our thanks to Orly Mayron, Tournament Director; Betty Murphy, HOA Director; and to Robson Ranch restaurant staff.