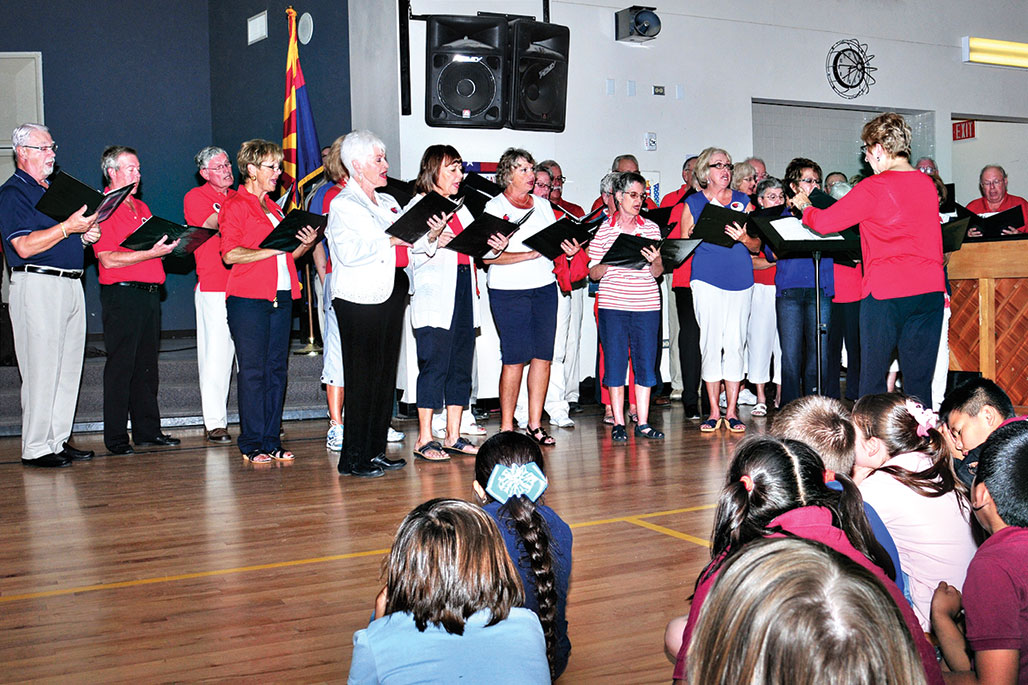 Approximately 30 Robson Ranch Singers participated in a Veterans Day program in Arizona City on November 10 under the direction of Jacquie Fedie and accompanied by Sandy Kantrud.

On Monday, November 10, the Robson Ranch Singers performed at the Arizona City Elementary School in Arizona City for the school’s very first Veterans Day program. Students from Cambridge Preparatory Academy, a charter school that shares the elementary school campus, also attended the event along with invited friends and families of the students and veterans from the Eloy and Arizona City communities.

The Veterans Day performance was organized by the school’s music teacher, Kim Lowers, whose music students joined the Robson singers in performing the National Anthem. A highlight of the program was the singers’ rendition of A Tribute to the Armed Forces, during which veterans from all branches of the U.S. Armed Forces in attendance were asked to stand and be recognized.

The students then entertained the audience with Yankee Doodle Dandy and You’re a Grand Old Flag, to everyone’s delight. The Robson Singers concluded their part of the program with God Bless the U.S.A., while students from the Cambridge Academy who are learning American Sign Language signed the song as other students joined in on the final refrain.

“It was an honor for me and the singers from Robson Ranch to be a part of this moving inaugural program,” said Jacquie Fedie, director of the Singers. “We were extremely impressed by the enthusiasm and patriotism displayed by the students, and we congratulate them on their wonderful and well-received performance.”