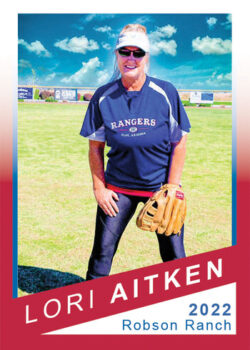 Lori Aitken got her first ball glove when she was 10 years old. “My dad loved playing catch with me in the backyard. He loved sports and had two daughters. He encouraged and helped my sister and me to learn to play all sports. I remember playing on blacktop playgrounds. Boy, did that ball roll if it got by someone.” Lori said she didn’t play school softball after junior high school. “I was primarily a volleyball player and a cheerleader from fifth grade on. My volleyball team went to state, and I was in many cheerleader competitions.”

The Milwaukee Brewers were the home team for Lori and her family. “I remember Bernie Brewer sliding down into the huge beer mug. Also, the 1982 World Series, I was in middle school when the Brewers won it all. Robin Yount and Rollie Fingers were my favorite players. Yount because he was great and Fingers because of his mustache.” Lori and her family joined thousands of Brewers fans by driving around in their cars honking their horns. “When the horn on my dad’s car died, we went home, got in my mom’s car, and went back out celebrating.”

Softball again became an activity for Lori when she was in her 20s. “I played in a bunch of bar leagues. Even though I wasn’t a seasoned softball player, I knew how to play and was athletic.” Lori first appeared on the Robson field at the Artie and Dixie Wachter Saturday community softball turnouts. “I joined the Saturday Robson league last year, and this year I joined the ladies tournament team, the Silver Sliders.” Asked to say what she likes most about senior softball at Robson, Lori said, “I have gotten to know so many more kind and fun people in our community. My husband, Andy, was an amazing athlete and good at everything he tried. He had a massive stroke 10 years ago and is a huge softball fan. He loves to attend softball games and cheers for everybody. The softball guys arranged for Andy to throw out the first ball, and he was so touched and excited. It was a moment that melted my heart and a memory I will cherish forever. That’s the kind of guys I get to play with here at Robson Ranch.”

Husband Andy is not the only family support Lori receives. Her parents are snowbirds from Wisconsin and spend their winters at Fiesta Grand in Casa Grande. “It feels like being a kid again with mom and dad in the stands.” Dad can be especially proud to see Lori still playing ball with the first glove he bought her when she was 10.

Lori is one of the first women to compete with the guys on the Robson Ranch field. She and the other ladies have been a welcome addition, and we look forward to competing with and against them.