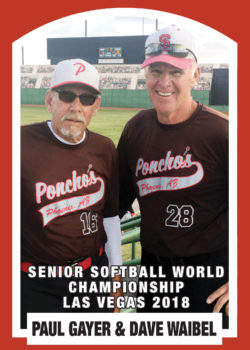 For the first two days, Ponchos played five games for seeding. The third day would determine the winner of the tournament. The single game elimination format leaves no room for error and the teams knew that. Ponchos came out swinging and took the first game. Since the team lost the second game, the third game was a “must win,” which was against the undefeated team, Tri-State. In order for the Ponchos to win the tournament, they had to beat Tri-State twice. And they did just that! After playing four consecutive softball games that day, Ponchos won the tournament!

Congratulations to all the guys who played on Ponchos, especially Robson’s own Paul and Dave.