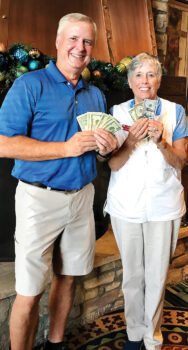 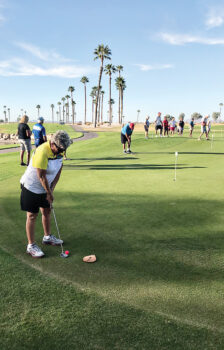 Dema Harris concentrating on her putt. 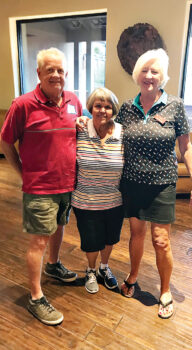 Our putting league started again for the season with incredible participation! It has become so popular that we now have two start times to accommodate the 130 people who signed up. This year, we will have two money holes for each event, and our first event had three winners! Congratulations to Chris Ogrodowski, Gloria Lamere, and Tom Curtin. I guess at least some of us practiced over the summer. Other results for Nov. 7 were as follows:

We had a special category for our kickoff for our “newbie” putters. Winners were Tom Curtin first, Jeff Wright second, Joe Harper third, and blind draws were won by Wanda Harper, Ed Brumfield, and Mark Mindrum.

Our second event was held on Dec. 5, and winners are as follows:

Both of the money holes were won on Dec. 5. First timer Ellen Fearing sunk a tricky long, downhill putt, and newbie Jeff Wright made a tough uphill putt to split the pot. Congratulations to all our winners! Our next event will be Dec. 19, so sign up early in the pro shop or contact Mary Pryor at [email protected] See you all on the green!