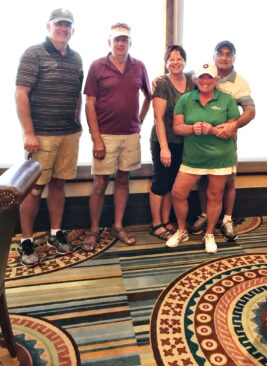 Welcome back to the Ranch, fellow putters! We have had two events already this season and have had great participation; 55 people on October 25, and 70 people on November 8.

Evidently, members started practicing and the Money Hole, worth $116, was won by Merlin Tifenhaler. Congratulations!

To sign up for biweekly events, sign up at the pro shop or contact Nick Pike. Monies won are credited to your account at the Pro Shop (except the money hole and restaurant gift cards).

On October 29, Robson Ranch had 24 putters who drove down to SaddleBrooke Ranch to compete with their putting league. It was quite a challenge that included an obstacle course of Halloween decorations. We will hopefully have the opportunity to challenge the folks at SaddleBrooke again later in the season.