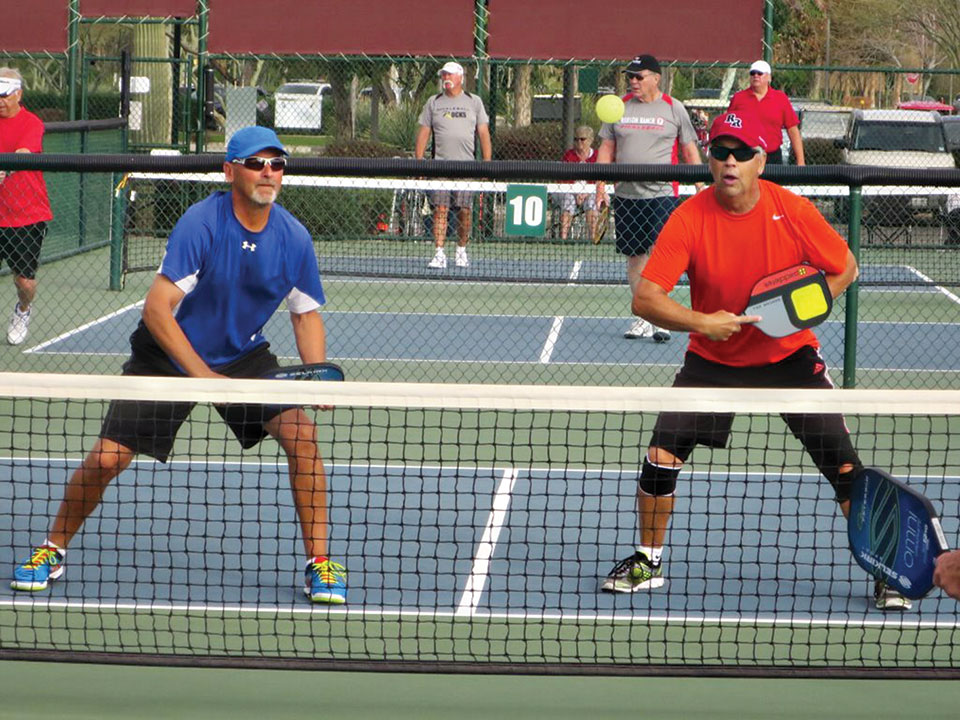 Lloyd Muth and Ron Hunt on their way to Silver in Men’s Doubles 4.0 plus

The Robson Ranch Pickleball Club held its fourth annual internal tournament on February 13 and 14. While intended to be primarily a social event, the level of competition continues to improve thanks to the participants’ play, an increasing number of resident referees and the volunteers’ support. There were 117 individual players comprised of 65 men and 52 women, 55 of which did not play in last year’s tournament.

The tournament was double elimination. Competition categories were Women’s Doubles, Men’s Doubles and Mixed Doubles. The skill levels were 2.0/2.5, 3.0, 3.5 and 4.0, with medals awarded to the teams finishing first, second and third place in each category/skill level. The matches this year seemed to be even more competitive with a large number of them going to three games in determining the winners.

The opening ceremonies included the Robson Ranch Singers performing a wonderful a cappella rendition of the United States and Canadian National Anthems. This was followed by the Women’s and Men’s Doubles events. There were 24 women’s doubles teams and 27 men’s doubles teams. After a total of 39 and 45 matches respectively, the Women’s and Men’s Doubles Team medal winners were

On the second day the competition was entirely Mixed Doubles. There were 42 mixed doubles teams. These teams played 76 competitive matches to determine the medal winners in each skill level. The winning teams were:

The tournament planning and decision making was provided by the Resident Pickleball Committee comprised of Chuck Bonesteel, Mary Burton, Wayne Champagne, Mickie Storckman and Gerard Wittman. This committee was supported by a group of team leads in the following areas: announcing, Gerard Wittman; court supplies, Steve Falek; check-in and registration, Ron Graf/Sandi Feller; first aid, Mary Burton and the Eloy Fire Department; food, Pam Phillian; and referees and line judges, Steve Arthur. A number of volunteers who are not identified herein due to a fear of omitting someone supported these team leads. The Pickleball Club would also like to acknowledge the Robson Ranch Singers for their participation in the opening ceremonies. Finally, the club would be remiss if we failed to thank the entire Ranch community for allowing us to tie up half of the Sports Club parking lot during our two-day tournament. A huge thank you goes out to everyone.

The club looks forward to an even better and larger participation level next year. Should you want to take part in this fun event and get bit by the pickleball bug you can get started for next year. Classes occur each Monday, Wednesday and Friday at 10 a.m. teaching the game. You then play with a group of people having your same skill level while you continue to improve. This year we had a number of people who won medals last year at a lower level move up and win medals at the higher levels.