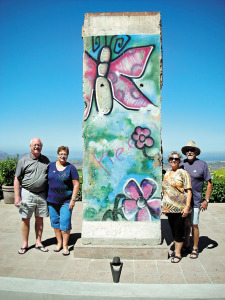 A piece of the Berlin Wall at the Reagan Library in Simi Valley. Left to right: Hap and Lynda Yoder, Jaine and Don Toth.

When Hap and Lynda Yoder learned that Don and Jaine Toth moved to Robson Ranch after living 36 years in Carpinteria, CA and that Carpinteria is just 10 miles south of Santa Barbara, Lynda said, with a hint of yearning in her voice, “We’ve always wanted to see Santa Barbara.” Not having been back in almost two years, the Toths said, “Let’s go. We’ll play tour guide.”

They first landed in Los Angeles where they went to The Getty Center Museum, the La Brea Tar Pits, the Peterson Automotive Museum and Venice Beach. From there it was on to Carpinteria, Santa Barbara and a short jaunt up to Solvang, sometimes known as Little Denmark.

Hap and Lynda enjoyed wading in the surf at Venice and Carpinteria beaches. Sites they took in included the Carpinteria Valley Historical Museum where the Toths served as docents for several years, visits to see two trees of historical interest, the World’s Largest Torrey Pine in Carpinteria and the World’s Largest Moreton Bay Fig Tree in Santa Barbara, and Cold Spring Tavern, a restaurant housed in the original building that was known as the Cold Spring Relay Station, a former stagecoach stop. Some time was spent at the Santa Barbara Courthouse, a must-see on every tourist’s itinerary.

The Toths and Yoders had mixed reviews on the weather. The marine layer kept the mercury down and the humidity up. Jaine needed to don a light jacket, and Don developed some breathing issues that were common when they lived by the ocean but have been negligible since relocating to the desert. They said to each other, “This is why we moved to Arizona.” On the other hand the Yoders enjoyed the respite from temperatures in the 100s. They wanted to know, “How can we bottle up this air and take it back with us?”