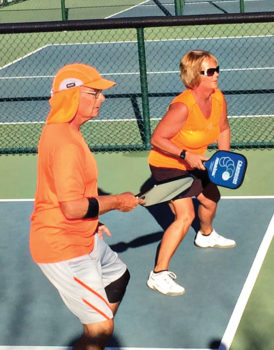 While it takes nine months to have a baby, it took five months of rigorous planning to give birth to the Robson Pickleball League, which encompasses five of the local Robson communities including Robson Ranch, SaddleBrooke Ranch, PebbleCreek, Sun Lakes and SaddleBrooke. Representatives of each community met every month over the summer with our Robson team to plan and set up the league for each community to play one another once a month over the winter.

The teams consist of 30 men and 30 women at the following skill levels: 2.5, 3.0, 3.5, 4.0 and 4.5+. Points are given for a team win, and at each match a total of 120 points are possible. Every pickleball club will play each Robson community once, and at the end of the season, which ends late March, the community with the most points will receive a championship plaque. Also, each individual rated level will receive a plaque for the best individual team level.

While we are awarding points for winning games, we want it to be a fun, social time more than anything else. The emphasis is on maximum participation from each club, meaning that from month to month we would like to see as many different players competing as possible. The goal is not to put our very best players on the court again and again in order to score as many points as possible. The league has become so popular that now there is a waiting list of players eager to play.

So far Robson Ranch has won two out of three matches:

The last match was against SaddleBrooke in February. Let’s hope that Robson Ranch brings home the Championship in March!

It took a lot of planning and coordination to make the league happen. Thanks go out to Jim Duran and team of Donna Duran, Kandis Larkey, Wayne Champagne, Tori Chester, Bill Schlaupitz, Gary Ocheltree and Artie Wachjter.