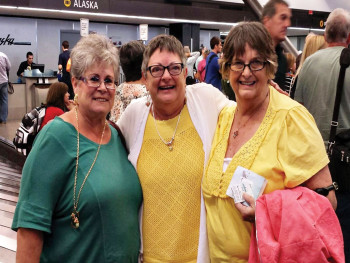 No one on last summer’s Alaskan cruise could have been as excited as Louise Kant of 5374 N. Gila Trail. She was accompanied by two sisters whom she had first met earlier in the summer. Louise had been separated from her birth family shortly after birth. She had been adopted as an infant. This reunion was made possible by her involvement in genealogy.

Because of the sensitivity of an adoption, records are sealed. However, a genealogy friend had discovered birth records had been opened for people born before 1946 in Illinois, Louise’s birth state. Louise discovered her mother’s name, and her mother had given birth to two children—both living. Using the name Pennington, Louise searched for her sibling using people search. Looking in high school annuals, Louise found Carolyn Elaine Pennington who is two years older. Louise wrote several letters to old addresses, but all were returned undeliverable.

In 2013 Louise started building her Pennington family tree on ancestry.com. A first cousin, Gloria Peck, was also posting information about her aunt, Geraldine Pennington, Louise’s mother. This opened the door for Louise to learn about her birth family. Contact with Gloria began piecing together the family tree. Not only was Carolyn her older sister, but she also has a younger sister, Susie.

On January 28, 2014 a quivering voice left a message on Louise’s telephone. “Louise, this is Carolyn. I just got a call from Gloria, saying that you called and are my sister. Oh my gosh, I’m so excited! Momma told us we had a sister but gave no information on how to find you. So listen. Please call me at this number.” Since this initial call the sisters have had numerous contacts.

While traveling to Michigan for the summer, the Kant’s stopped in Illinois and visited with Carolyn and her family. Later in the summer they met Susie and her family from Nashville. These successful visits led Louise’s husband Doug to instigate the exciting Alaskan cruise.

Louise’s contact with her sisters and further research has led to discover the circumstances of her adoption. After a divorce, Louise’s mother gave up her newborn baby girl for adoption. Louise’s mother felt that she could not provide for two little girls. Louise has always known she was adopted, and her sisters who were raised together have always known they had a sister. Louise has learned the sisters lived within a few miles of her not knowing the relationship. It took Louise’s interest and experience in genealogy to bring these women into each other’s lives.

Though Louise has discovered her birth mother and two sisters, she is still unsure of her birth father. His name was not on the birth certificate. Louise is using Family Tree DNA program to trace blood results with the cooperation of a Pennington family member—a possible uncle.

Most of us don’t have an exciting emotional story like Louise, but we have questions. What do I know about my ancestors? Where did they come from? What did they do? Am I related to someone famous? Do I have ghosts in the closet that can make me laugh? The Robson Ranch Ropin’ in Yer Relatives Genealogy Club is a great place to start putting your family history puzzle together. Come get started. We meet the second and fourth Tuesday of the month with guess speakers and willing members with computer experience to help guide you.