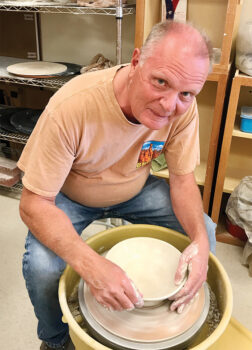 All was a buzz at the Pottery Studio the past few months as a true potter, or “Crocker” the old English term, was in the community. Warren spent many hours at the potter’s wheel demonstrating and teaching club members various techniques. Since our club has three potter’s wheels, several members had the opportunity to make their own pot under Warren’s direction.

Warren and his wife, Cindy, from Grand Forks, N.D., were renting a home at Robson Ranch for the winter. Warren has been teaching at a potter’s studio, with forty members, for sixteen years.

Warren and Cindy are hoping to return to Robson Ranch next winter. The members of the Pottery Club are looking forward to Warren’s return and his continued teaching.