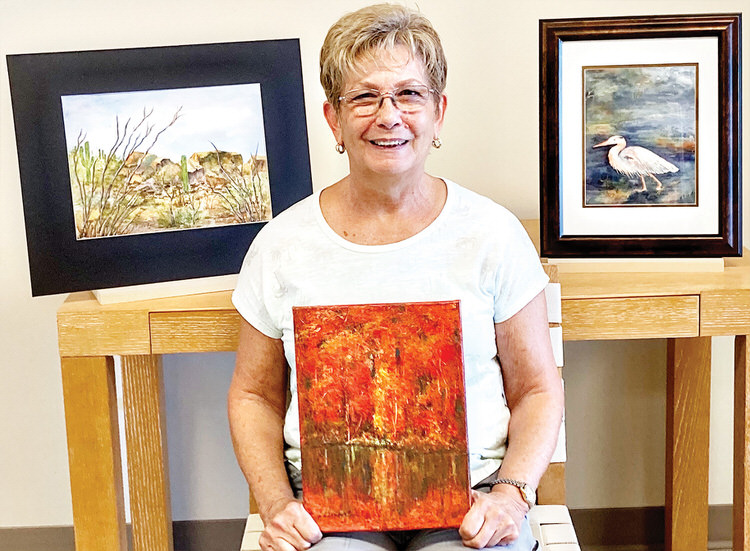 Paula Lambert with some of her artistic creations.

Paula Lambert retired from hairdressing in July 2007, and moved to Robson Ranch in August 2007, from Swansea, Mass.

Paula and her husband spent their vacations visiting many active adult communities all over the country. One winter, they were able to get an inexpensive flight to Phoenix and looked around at the different communities. After a visit to Quail Creek, they decided to look at Robson Ranch. At that time there were not any homes built yet. They liked what they saw and picked a home location on the map. What a leap of faith! And they are so happy they made this their home.

Paula was always interested in painting and had started out working in oils, and then progressed to watercolor before she was married. But as they say, “life gets in the way.” Working, raising a family, and owning a couple of businesses, there wasn’t much time for hobbies.

Originally Paula had intentions of working when they moved here, but found herself too busy with hiking, pickleball, golf, tennis, and the many social gatherings. There wasn’t time to fit in a job.

The Creative Arts Center wasn’t built until a few years after Paula moved here. But when it did open, the first thing she tried was pottery, a medium she hadn’t yet tried. She found she really enjoyed learning about pottery and that she was still creating art, but in a different form.

Paula works on her watercolor painting and continues to work on her pottery art.

She has taken multiple classes in all phases of the arts that she does and says that if you take away just one thing, it is worth the time and cost. If someone tells you that you have no talent, just remember what Paula says, “Everyone is good at something, you just have to figure out what that something is.”