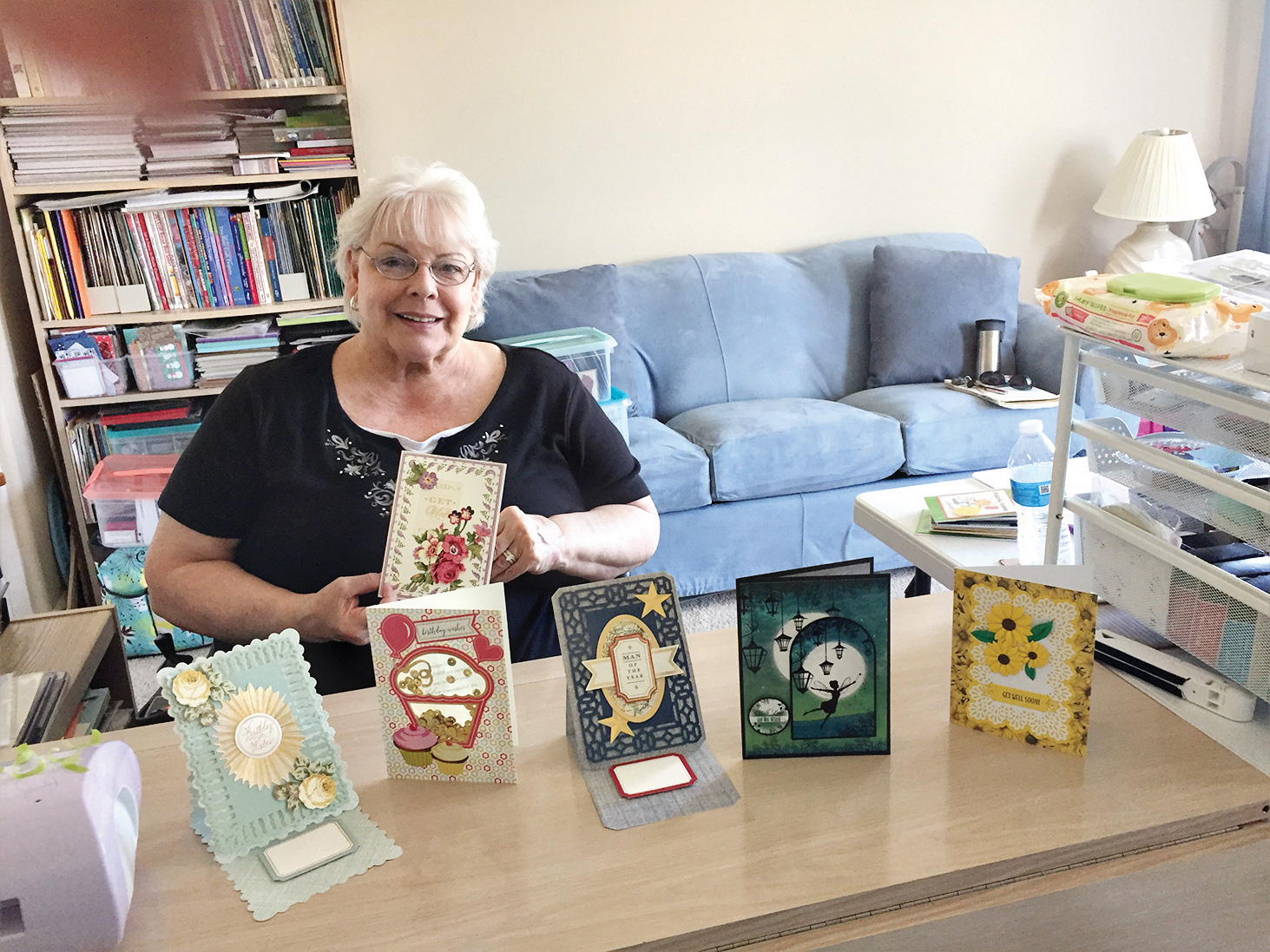 Georgia with her creations

Papercrafting didn’t start out as Georgia Brosnihan’s first choice in artistic outlets, but it turned out to be her top creative endeavor. She even has an entire room in her home fitted out to accommodate her plethora of supplies.

While living in Suffolk County on Long Island, N.Y., Georgia belonged to a group of crafters, despite finding their name, “The Homemakers,” a bit too dated for her taste. “So ’50s,” she said. She served in several positions in that club, even as the project coordinator, which she does marvelously well here at Robson Ranch, as well. At that group, there would be several different crafts taking place in the large room at once. There could be beading, cake decorating, painting, and papercrafting among many others.

On moving to Robson Ranch in 2014, she first joined the Material Girls. She signed on to the Papercrafting Club a year later and also joined Fine Arts and the Gourd Club. Following a fall that left her confined to a wheelchair, and having shoulder problems, quilting became problematic. She whittled her artistic endeavors down to the occasional art class and papercrafting.

Georgia loves taking classes and learning new techniques. She also gets inspiration from people who share cards on Pinterest and YouTube and then tries to create similar ones with her own adaptations. If she doesn’t have the supplies needed (dies, stamps, specific equipment) and neither does the club, she’ll search the internet and then order what she needs. These projects often become the basis for a new class.

Since taking the position of project coordinator at the beginning of the year, and following the reopening of the Creative Arts Center post COVID-19 closure, she’s been offering classes each month and also has encouraged others to do so as well. This has had the added benefit of drawing new members and the club has been growing so much that we’ve added Monday mornings in addition to our regular Thursday afternoons.

A few years ago, Georgia realized that she had a large number of finished cards but not enough need for them. When she heard there would be a fall craft fair here at Robson, she looked through her cards and realized she had only one or two of each, so she got to work and made sure there were five of each design, and reserved a space. It was so successful that for the spring fair she made ten of each, and has become a popular vendor at subsequent ones. She hopes to be back participating in the fairs when everything reopens in the (hopefully) near future.

Most days you can find Georgia at her work desk in her home craft room. She finds it healing to get lost in her work. Some days it will be time to stop and prepare dinner and she’ll wonder how the day flew by so fast. She even forgets her pain when she’s absorbed in a creative project. She finds her absorption in papercrafting to be “Relaxing. Comforting.”