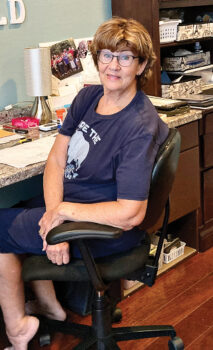 Julianne in her creative space 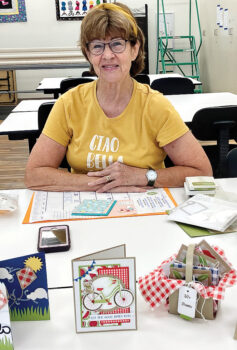 Julianne and some of her creations 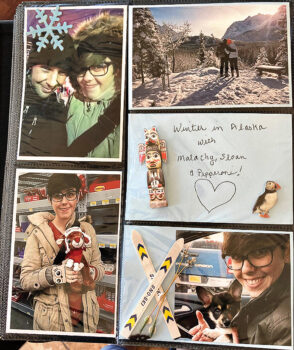 Julianne Young relocated to Robson Ranch in February 2021, all the way from Mission Royale in Casa Grande where she spent 17 years as a winter visitor from Washington. As Julianne recalls, “I joined the club in April after seeing it listed in our HOA Directory/Handbook. I contacted Pat [Serveiss] with my questions and then came to the first Monday gathering after the group began meeting again.” Some of her friends from Mission Royale have also moved and she is encouraging them to also join the Paper Crafting Club.

About 20 years ago, Julianne was introduced to paper crafting at a “Stamp Camp” put on by a demonstrator of the company, Stampin’ Up! For a fee of $10 they made ten cards. “As a beginner, it worked for me,” Julianne says. “I was surprised by how much I liked it—I was hooked!”

This is likely an outgrowth of her favorite childhood activity: paper dolls. Each year she carefully scanned the Sears Christmas catalogue and cut out pictures of clothes for her paper dolls. One year when she had chicken pox, she couldn’t go to the circus with her brother and grandparents, so her grandmother gave her a circus-themed paper punch-out set, which she treasured. “I still have never been to the circus to this day,” she says.

Julianne subscribed to the magazines Paper Crafts and Creating Keepsakes and laughs saying, “I darned near waited at the mailbox” for them to arrive. When she herself became a Stampin’ Up! demonstrator, she learned from some personal demonstrators’ websites and she still peruses the Pinterest website for ideas and inspiration. She either reproduces them as a whole or adapts part of what she likes for her own creations. While living at Mission Royale, Julianne regularly gathered with neighbors to do paper crafting and occasionally led workshops.

She makes an annual scrapbook of each year’s highlights and occasionally creates one dedicated to a specific event or trip that warrants more space. In addition to traditional scrapbooking, Julianne’s found a shortcut that she also uses. She buys albums with photo pockets and on each page, she fills one or two pockets with text or embellishments.

“I love greeting cards because it’s almost instant gratification,” she says. “I can complete a card in an hour and a half to 2 hours that I’m happy with. A scrapbook page can take much longer.”

Making the cards in itself is gratifying, but comments from recipients make it all the more encouraging to keep at it. For those who tell her they love her cards and actually save them, she takes extra time and effort to create more distinctive cards with various shapes, folds, ties, and pop-ups.

When Julianne had surgery on her hand, she was unable to create handmade cards, so she substituted computer-generated photo cards at Christmas, “and I heard about it!” She was amused at how many complaints rolled in, “…even from people who don’t send cards out themselves.” It’s affirming for her that so many people look forward to and appreciate her efforts.