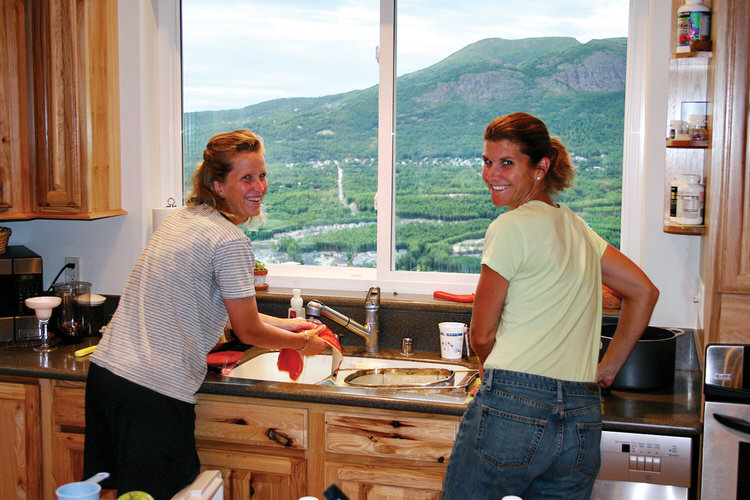 The Robson Paper Crafting Club once again is lucky to have another talented and experienced paper crafter relocate and join our group. Dawn Evans, formerly of Minnesota and Alaska, became a full-time resident at Robson Ranch in February and promptly joined our club.

Dawn began paper crafting 25 years ago when she was introduced to it by Elizabeth, her best friend from high school. Then living in Alaska, she went home to Minnesota on a visit and while there, she mentioned to Elizabeth that she was trying to get her family photos organized. A Stampin’ Up! demonstrator, Elizabeth introduced Dawn to the addictive fun of scrapbooking “And,” Dawn says, “I was hooked.”

She went back to Alaska with a new passion and ended up becoming a demonstrator herself for a different paper crafting company, Creative Memories.

She decided to make separate books for each of her two boys that she can leave as a family heirloom for them. What had begun with the typical baby books has blossomed into what will ultimately be a treasured gift of lifelong memories for them.

Though she has a well-organized craft space at home (she made good use of the front closet in her Pavano model home), Dawn likes to come work at our studio in the Creative Arts Center because there are fewer distractions and she can give the work her undivided attention—except, of course, for some of the fun conversations that take place. All in all, she gets more accomplished. She really enjoys the times when she comes with no project started and leaves with one that’s completed.

Dawn and Elizabeth stayed in touch and encouraged each other long distance. On Dawn’s annual trip back to Minnesota or a visit to Alaska by Elizabeth, they always made time to craft together. Dawn admits she used some of the pages from the scrapbooks Elizabeth created for her four boys as a template for her own. Why reinvent the wheel?

In addition to the boy’s books, she creates an annual Christmas album, including the Christmas cards she’s created. Almost every year she makes over 100 cards to send to loved ones. She loves going back through each of the scrapbooks to note the progression of the families throughout the years and savors all the memories they bring forth.

Dawn’s birthday is June 11. About a week before that she was stunned to find two hand-addressed cards among the junk mail and the bills in her mailbox. It was unexpected and surprising. Her curiosity was great as she opened the envelopes to see what was inside. Of course, they turned out to be handcrafted birthday cards from a couple of the club members. When we spoke, it was several days since they’d arrived and it still lit her up like a candle as she told me about them. One of the things she especially appreciated was the handwriting, both for the address on the envelope and sentiments inside the cards themselves. Dawn laments the ever increasing loss of the art of penmanship. She recalled asking the members of one of her son’s swim teams to write thank you notes; few of them knew how to address an envelope. We spoke almost a week before her birthday. I’ll look forward to her reactions once she receives even more cards from more club members.