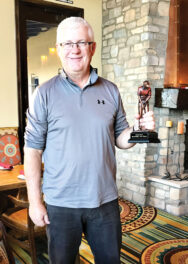 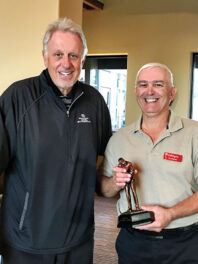 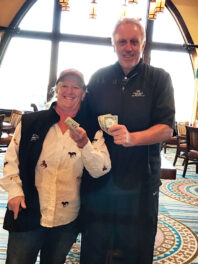 Even through the busy holiday season, dedicated homeowners were out on the putting green on Thursdays, competing for the traveling trophy of our mixed putting league.

The January 4 competition was played on a beautifully warm afternoon. Net winners were Sharon Kasper, first; Steve Lorenzen, second; Everett Goin third. Gross winners were Larry Sundin, first; DuWayne Lamere, second; Jim Bellach, third. The two blind draws were won by Mike Bohmert and Cindy Sorensen. The money hole was a tough one this week, and even though the weather cooperated no one got that hole-in-one so the money will be carried over to our next event (which will be on January 18).

Special thanks to the grill for the $25 gift certificates that were won by Paul Hoff and Al Kindt.

The next event will be on January 18, so sign up at the pro shop for a fun afternoon. Everyone is welcome to play, so if you have a guest staying with you bring them along! The round usually takes about an hour to play, followed by the enjoyment of refreshments at the grill with old and new friends.