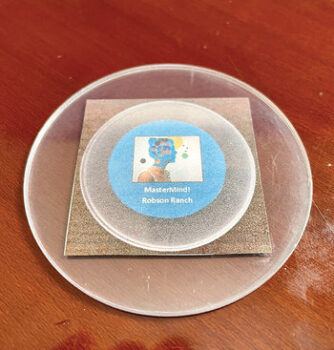 The MasterMind! Robson Ranch Medallion shown in the photo is hidden somewhere in our community.

Back by popular demand! You might remember the successful treasure hunt for the MasterMind! Robson Ranch Medallion that was held last October. Well, the search is on again. This is your opportunity to sharpen your detective skills, get a bit of exercise, and enjoy the thrill of pursuit.

You have the opportunity to find the medallion and win wonderful prizes: $50 in cash, two $25 gift cards from Clean Freak Car Wash, and dinner entrees for a party of four at the Old Spaghetti Factory in Chandler. When found, contact Sam Ellis at 503-720-7207 to claim your winnings.

* It is not hidden on any homeowner’s private property.

* It is not buried underground.

* It is three inches in diameter.

* Reasonable efforts were made to hide the medallion in a place that does not preclude those who are variously abled from finding it.

* Daily clues about the location of the medallion will be posted on Nextdoor beginning Jan. 22. 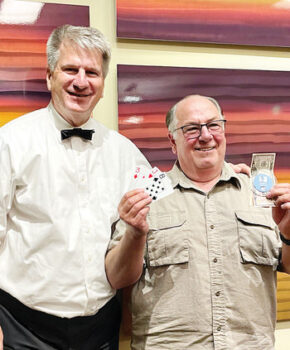 There was riveting action on Nov. 19 in the Cheyenne/Laredo Room. Twenty extremely talented blackjack players competed in a tournament, and they were cheered on by a supportive audience.

Seriously, you cannot fathom what it was like to hear people cheer when one of the players hit a blackjack with a lot of chips on the table.

The 20 players fought through 15 qualifying rounds in order to win one of the five seats at the final table. Those finalists were Walt Jackson, Janet Bloam, Phil Brunell, Les Balcer, and Lori Aitken.

Several strategies emerged among the finalists as they played 20 hands of blackjack to determine the champion. And, with quite a bit of drama, it went down to the final hand. The players went all-in. Phil Brunell hit a three-card “21” and the dealer landed on “18.” Phil came from behind, worked his way to the top of the competition, and won it all.

He came away with a medallion signifying his win, $50 in cool cash, a $50 gift card from the Hideout Steakhouse and BBQ restaurant, and tons of street credibility. Please congratulate Phil if you see him.

On another note, the event was free to everyone. No one needed to pay money, buy chips, or anything. However, a donation jar was in place; $215 was raised for the local Valley Humane Society. Thank you to all who are so supportive of MasterMind! Robson Ranch activities.