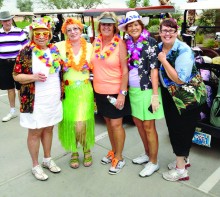 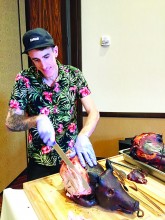 Dustin Patrick, creator of the event, cutting into the smoked pig. 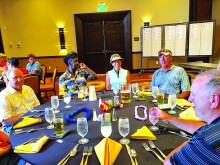 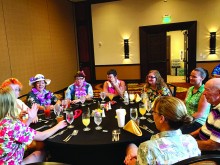 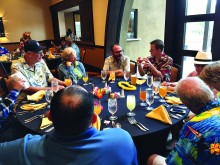 Group picture of the dinner at the Luau 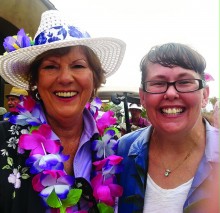 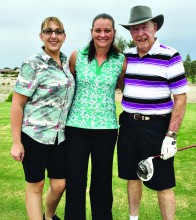 On Monday, September 21, 2015, homeowners joined the Food and Beverage Employees for a fun 9-hole golf tournament that included many prizes: longest drive, closest to the pin and a putting contest to name a few. It was a “two-person, alternate shot” event. This tournament was the idea of employee Dustin Patrick, the Robson Ranch Sous Chef.

Wearing some type of luau clothing was mandatory. The overcast day included some sprinkles, but we were able to brave the last couple of holes in the rain. You could hear laughter, players yelling at their golf ball or just some words of encouragement. This was the first time many of the players tried the game of golf. Many of these first-time players hope to practice more to get ready for the tournament next year, as Dustin hopes this will be an annual event (or twice a year as some at the luau suggested).

Thanks to all who came out to join in the fun. And thank you to Dustin, Jay Wilson and Jim and Kay Moore for helping with the event! The food was great, and a big thanks to Heather Hardesty and the food and beverage staff that serviced us at the luau.