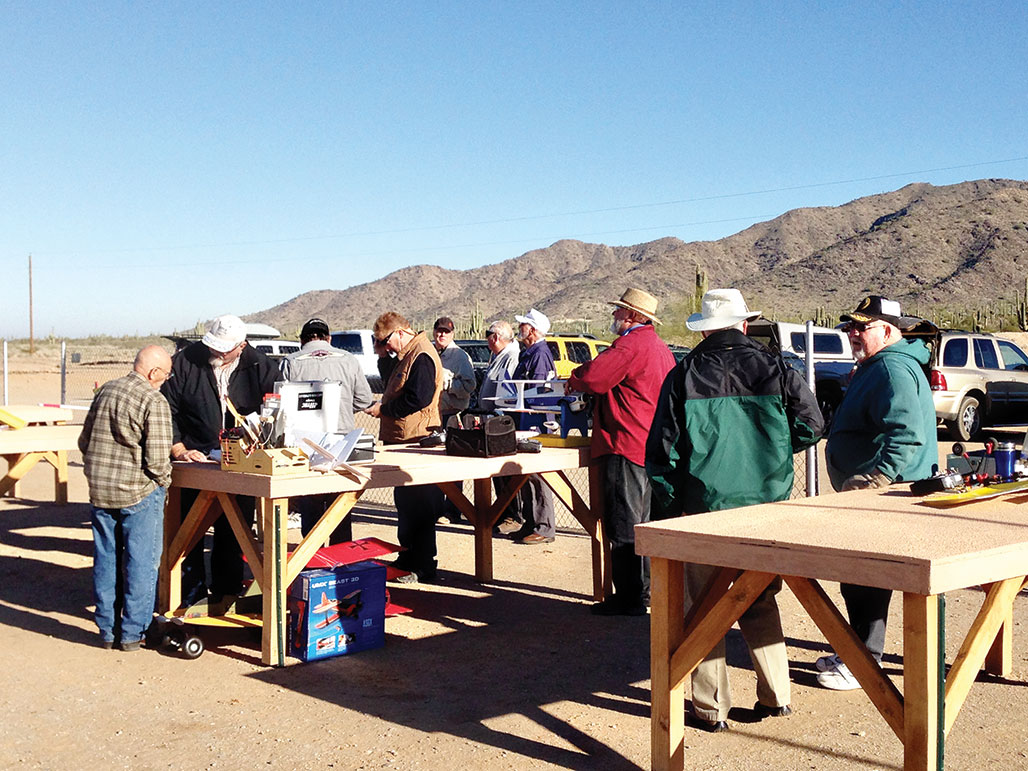 Members at the field

In the fall of 2011, two residents of Casa Grande made a request of the Parks and Recreation Department for a radio controlled air field in a city park north of Casa Grande. Due to concerns of noise for neighboring houses, injury and liability issues and the close proximity to the Casa Grande airport, the Parks Department opposed the establishment of the field.

Following up on an alternative site mentioned at the Parks and Recreation meeting, members of the two largest private RC clubs in the area organized a club that would allow all valley RC flyers to join together in their love of RC flying unfettered by residency requirements. This club, called the Casa Grande RC Flyers (CGRC Flyers), had a membership drive in June and accumulated approximately 70 members. A Board of four officers was appointed with Robson Ranch resident Alan Friedman as president, Richard Beck as vice president, Craig Rice as treasurer, and Ron St. Pierre as secretary. This board organized another presentation for the Parks and Recreation Department, which included a video from an Oro Valley club and a visit to the Robson Ranch airfield. Although the Parks and Recreation Department thought the use of the land near the shooting range at Casa Grande Mountain would be a good site for the new RC field, the mayor and city manager rejected the site because they felt there was not enough land causing an infringement on neighboring lands not owned by the city and the local Trap and Skeet club.

Not to be detoured, Alan Friedman contacted the head of the Trap and Skeet club and the Chamber of Commerce. Having had previous experience with neighboring shooting and RC flying clubs in Colorado, the head of the local Trap and Skeet Club had no problem with the establishment of a neighboring flying field in Casa Grande. It was pointed out to the Chamber president that the CGRC flying club would hold events to which the public would be invited and would also help other clubs/churches with fundraising at those events plus teach young flyers, such as the Boy Scouts, how to fly. An email to all the members of the CGRC Flyers was sent encouraging them to write to their city councilman asking them to reconsider a field for their club. The numerous emails received by the mayor and city council members from the club’s membership caused the issue of an RC flying field to gain life again. A meeting was again requested by Mr. Friedman with the mayor and city manager. They agreed to meet. At the meeting the mayor and city manager expressed their real concerns of liability and fire. Mr. Friedman addressed both those concerns by explaining that only AMA members could use the field since their membership included liability insurance. The city officials warmed to the idea but wanted to discuss the terms of a lease, field design and other safety issues. It was determined that by making the club a non-profit corporation and having the club obtain the AMA’s field insurance, the city could then lease the land to the club and avoid liability. In October 2012 the AMA authorized funding for the Casa Grande RC Flyers to become a non-profit incorporated entity. The survey of the land was completed, and what was thought to be only 2.8 acres of land for the airfield was indeed almost 11 acres.

When all the paperwork was completed for the incorporation of the CGRC Flyers, the proposed lease of the 11 acres was requested of the city council at its December 17, 2012 meeting. The only question asked at that city council meeting of the president of the Casa Grande RC Flyers, Alan Friedman, was if AMA membership was required to fly at the field. He explained the requirement of membership in the AMA was how the field and membership would be insured for liability purposes. No other questions were asked, but instead comments were made praising the fortitude with which this project continued over so many months and “the wonderful collaboration between the private and public sector” to finalize the establishment of the airfield. It was stated that usually there was only a request of the city council for help but nothing in return for the council or city. However, in this case the club was going to host public events and would teach others to fly.

One more reading of the request for the establishment of the field was read and approved at the January 7, 2013 meeting. The official lease was signed on January 22, 2013 for the sum of one dollar a year for up to eight years with a renewable clause. A meeting of the community service director, public works director and board members of the CGRC Flyer club was held on February 1, 2013 to discuss what the city was going to do for the final preparation of the airfield site and its completion date. The final completion date was February 22, 2013.

The Casa Grande RC Flyers has since grown to over 130 members and developed their lease land to include a paved runway, toilet facilities, flight and arming tables, benches, pilot stations and an informative website: www.CasaGrandeRCFlyers.com.