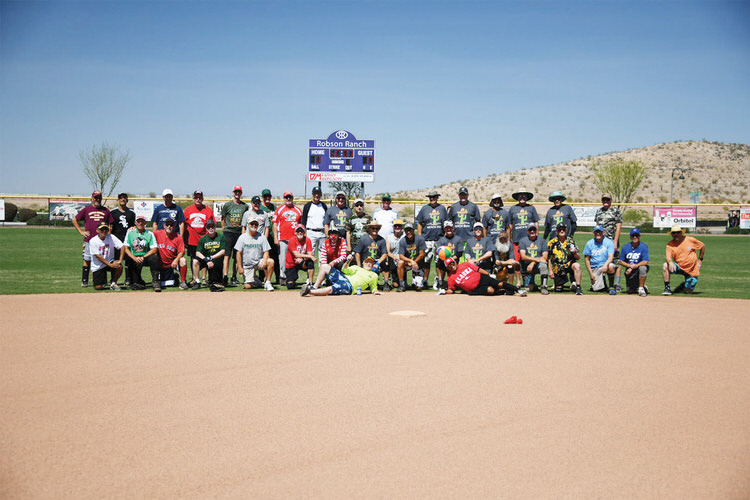 On April 1, the Robson Ranch Softball Club played two exhibition softball games to raise money for the Eloy Food Bank. This was the first year of what club president Bill Dirkes says he hopes will become a yearly event. Each participating player contributed, and donations from the fans were accepted at the games. An impressive total of just over $1,500 was the final tally. Many thanks to all who donated.

In addition to playing regular senior softball rules, the teams were able to call a “mulligan.” For an additional $10 donation, teams could negate the play just completed and return runners to bases and the batter to the batters’ box. Several key hits and runs scored were wiped out with these “mulligans.” Other nontraditional rules were interjected on a one-per-inning basis. Running bases in reverse order, having to bat from the opposite side of the plate, and playing one inning with a “mush ball” were all part of the fun.

On a bright April day with a light breeze, the Mayor of Eloy, Micah Powell, was on hand to throw out the first pitch. Kim Gibbs sang Oh Canada and The Star-Spangled Banner and the fans were in full volume cheering for their favorite players. President Bill Dirkes roamed the field with a hand-held microphone conducting on-the-spot interviews with players and coaches.

The club wishes to acknowledge the contributions of Clark and Teressa Fletcher, Jim Innocenti, and Randy Pomplin for their efforts to make this a special day for our club. Additionally a big thank you goes out to the players and fans who make living and playing at Robson Ranch an honor.