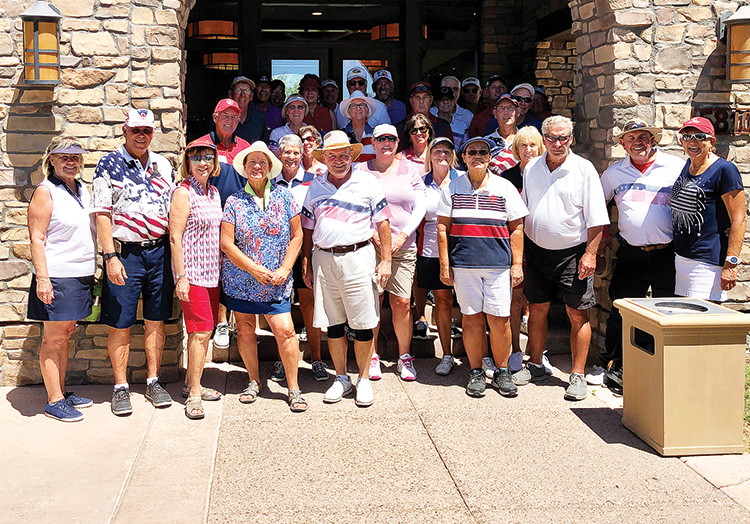 Robson Ranch Golf Course held its annual Flag Tournament on the fourth of July. Despite the heat, there was a good turnout of golfers who showed up in their patriotic red, white and blue attire to see if they could be the last golfer to raise their flag. Once they checked in, the golfers were given an American flag that would, in the end, determine the winner. The game was based on nine holes with each player starting out with 36 strokes plus a percentage of their handicap. So, if they were allowed a handicap of eight, they would be allowed to take 44 strokes before having to raise their flag. The object was to see how far players could get before they reached their allotted strokes. Don Juillerat was able to make it all the way through nine holes with two strokes left but came up short of the green on ten, so he had to raise his flag at that point. Not to be outdone, Bernie Drew was in the same situation but was able to get his last shot to go just a little closer, which earned him the first-place prize (a nice red, white and blue golf bag). Don was awarded a patriotic golf shirt for second place, and there were several random drawings for other prizes. Congratulations to Bernie and Don, and thank you to all who came out to play. A special thank you goes to our pro Jay and his staff for organizing this fun event!