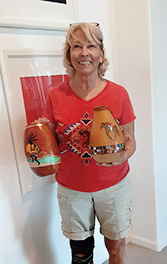 Our gourd member of the month is Marti LoSasso. Marti and her husband, Jerry, are originally from the Denver, Colo., area. She was a beautician and Jerry a firefighter. Marti always had a flair for the arts, whether it was spinning a beehive hairdo, bending wire to create a one-of-a-kind piece of jewelry, or designing wood plank art embellished with beads, wire, and paint.

Her art also took her to the depths of the ocean, where she taught scuba diving for 30 years. She was a very busy lady for sure. Scuba diving friends convinced her and Jerry to travel to Costa Rica for an exotic, crystal-clear dive among coral reefs and dolphins, and to witness the array of brilliantly colored sea residents traveling in schools of all kinds and sizes. How could they refuse? They weren’t disappointed. They were in awe of the lush greenery, vegetation, birds of all sizes, colors, and songs.

So, they bought land and proceeded over the next two years to build their tropical home overlooking the ocean. In 2008, they both retired and started their new journey of exploring the terrain, experiencing new food, and meeting the people. Bread that was taken for granted was $6 a loaf, so Marti learned how to make fresh bread. There was no problem in the produce department, especially if you were looking for a nice yellow banana—just go pick one. Belonging to an expat community, it was easy to meet people, gather for cocktails, and share stories and experiences. After nine years abroad they began to miss the states. Marti chuckled when I asked her what she had missed most, and without any hesitation she said, “My library card.” Being an avid reader and using her computer to buy books online, reading had gotten to be quite expensive. They knew it was time to embark on another adventure, so it was “Arizona, here we come.” Looking at several 55+ communities, they were drawn to us. Marti said that they both knew our community was the one. On a tour of the creative arts building, she wandered into the gourd room where an introductory class was being held. “Wow, I want to learn how to do that,” she thought. Fascinated by the equipment being used, and the gourd itself was the clincher. In October 2020, Marti and Jerry became Robson’s newest residents and she became a gourd club member. She quickly mastered gourding and has even shown veteran gourders some new techniques. An artist she is, and we’re happy to have her as a member.

We hope you were able to attend the art crawl on Nov. 20 and meet some of our gourd members. Marti was just one of the eight gourd members who displayed their artwork. It was a fun day for all, and we look forward to seeing you at future art shows.

Our next gourd orientation class will be in January 2022.