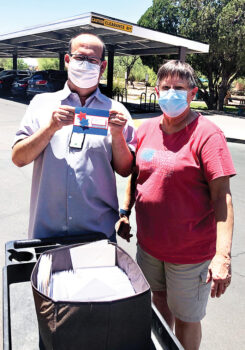 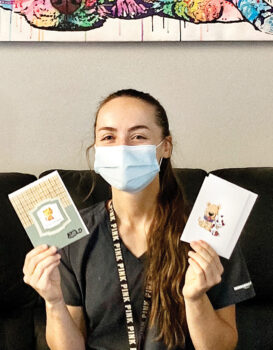 The Robson Papercrafting Group helped bring smiles with their handmade cards at two different charitable organizations in May.

Jaine Toth visited the Pinal County Animal Shelter on May 18 and presented 50 cards to Adoption Coordinator Braidy Susel. The intent is for them to hand them out to people adopting pets. Susel assured Jaine that, “We can definitely use all of them and are looking forward to handing them out!” The card fronts contain whimsical depictions of cats and dogs, while the insides bear various messages. For example, one includes a dog or cat addressing its new pet parent(s) saying, “Thank you for giving me a furever home.”

As Jaine turned to leave, the receptionist called her over to inquire as to whether the group had gifted them with cards the year before last (they were unable to meet during the pandemic lockdown). When Jaine said yes, the receptionist brought one out from her desk. She said she’d saved it because she so enjoyed looking at it. She wanted to know how the group came up with such clever designs and seemed awestruck that they were created by the members themselves. It was encouraging to receive such positive feedback and know their efforts bring joy to others.

On May 24, Pat Serveiss delivered 100 Memorial Day cards to the Tucson–Southern Arizona Veterans Hospital. She related that “Jason, a hospital volunteer, expressed his thanks and said the vets will so enjoy getting cards expressing how much we appreciate their service.” She also learned that there are other groups who deliver cards for Veterans Day, but they don’t, as a rule, get cards for Memorial Day, so these will be particularly special for them.