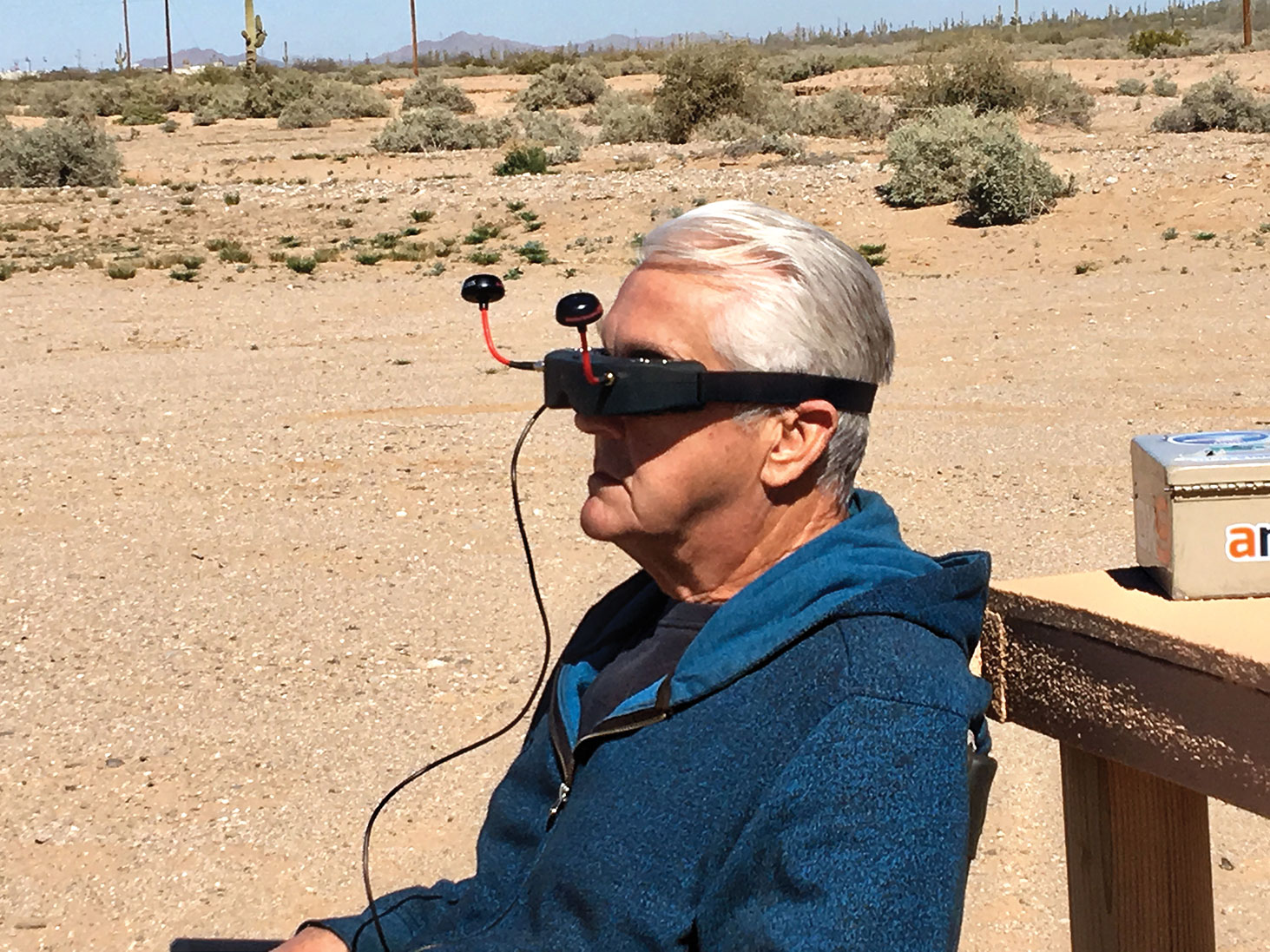 A guest enjoys a “first person view” airplane ride where he actually sees what is viewed from the cockpit of the model aircraft! 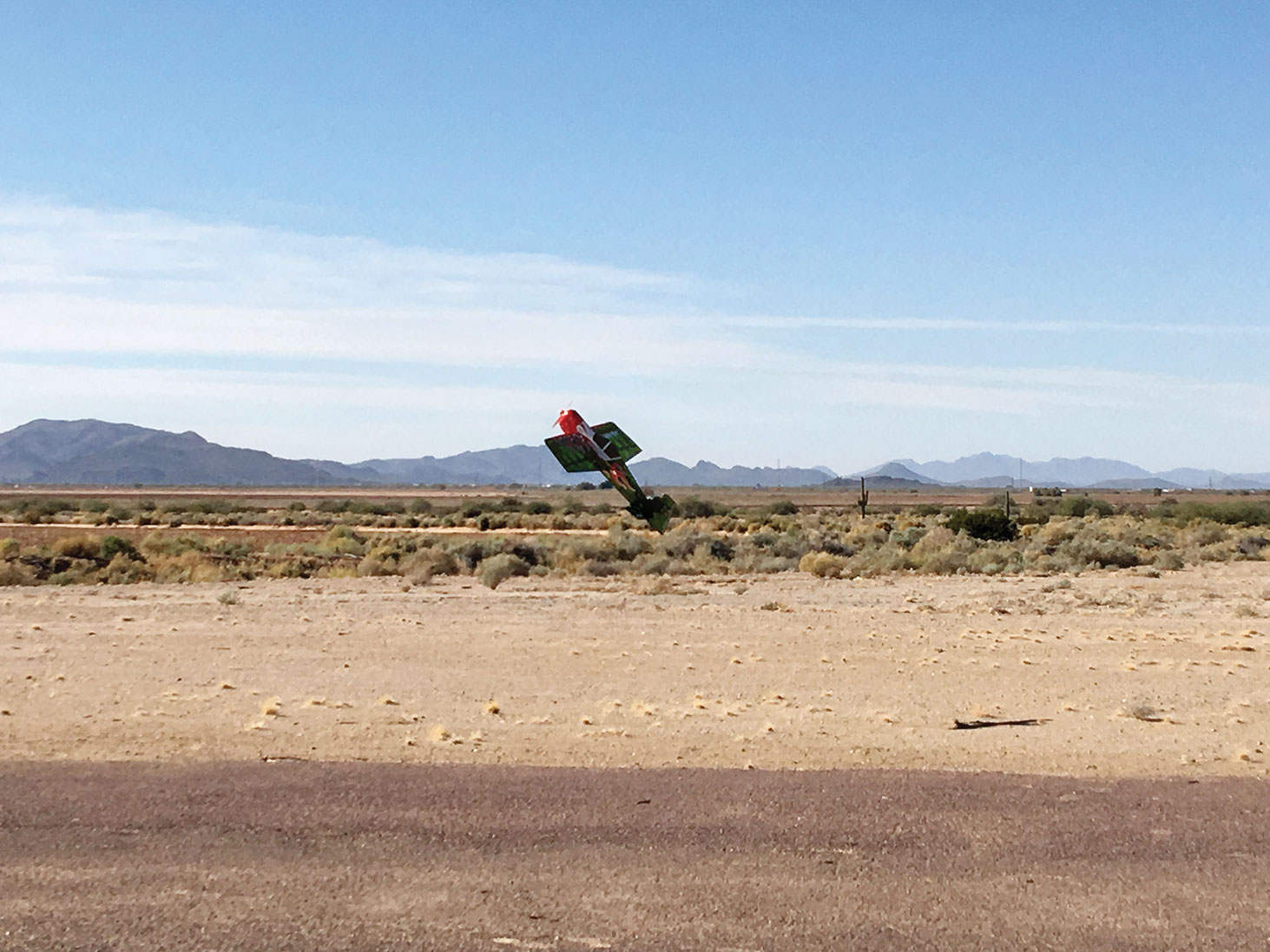 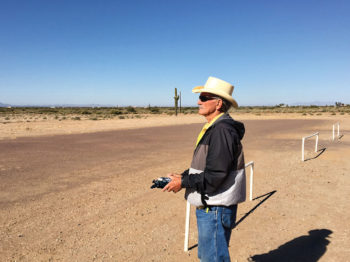 Attend this year’s gigantic Air Show scheduled for March 11, 2017 at the Casa Grande RC Flyers field. This annual free event draws spectators from all over the area. Last year over 300 people enjoyed the one-day event held at club field in Casa Grande, Arizona. This year’s event benefits The Valley Humane Society. They will have representatives accepting donations at the gate. New this year the club offers free model airplane flight training to any individual wanting to learn to fly a model aircraft. An expert flight instructor will teach you using “dual flight controls” allowing you to actually fly the instructor’s model. Free “first person view” flights will again be offered this year. First person view allows you to see what the pilot would see from inside of the aircraft. That was very popular last year. Finally, pilots will also perform stunts during a special one-hour period from 10:00 until 11:00 a.m. with other pilots flying during the remaining event hours. A food truck will provide the breakfast and lunch food service. The event hours will be from 9:00 a.m. until noon.

At the field the club added an entry gate, safety chain link fencing, nine flight tables, a starting bench, pilot stations, a portable toilet, a wind sock, spectator benches, a paved runway and a second dirt runway to the city-owned land. The city renewed its lease for another five years last spring because of the large number of people who have been attending club events, which include fun fly contests, swap meets and air shows. The parking lot has been filled to capacity forcing guests to park on the road outside the airfield and walk into the site. Therefore it is best to come early.

Many Robson residents enjoy watching the activities and are always welcome. People can expect to see most of the flying every Tuesday, Thursday and Saturday starting at about 10:00 a.m. especially during the swap meets and fun fly contests, which are held on the second Saturday of each month, November through March. A schedule of the club events and directions to the Casa Grande RC Flyers field can be found on the club web ite at www.CasaGrandeRCFlyers.com.

Membership in the Casa Grande RC Flyers is open to anyone wanting to fly or learn to fly radio controlled aircraft. Free lessons are offered by any of nine AMA certified instructors. The club has training aircraft and flight simulator for members to use. Membership in the Academy of Model Aeronautics (AMA) is required because the AMA membership provides the pilot with the required insurance coverage. Details about membership can be obtained by contacting Alan Friedman, the club president and AMA Associate Vice President, at his Robson Ranch residence.