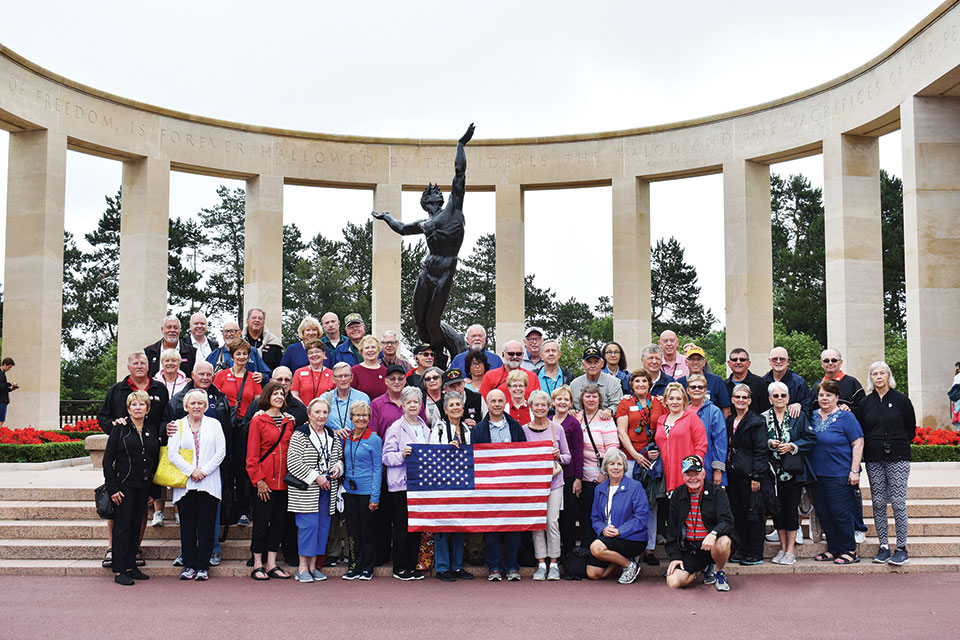 Fifty-six SOT-AZ supporters from Robson Ranch, AZ along with 11 SOT supporters from Robson Ranch, Texas toured the World War II landing beaches in Normandy, France June 27-July 1, 2017. SOT honored the fallen soldiers at the American Cemetery overlooking Omaha Beach, one of the major landing beaches of the liberation invasion for France. To open the wreath ceremony SOT-Texas President Mike Hoernemann and SOT-AZ President Steve Anderson spoke briefly regarding the sacrifices and valor shown by our gallant soldiers. Joanne Parkin of Robson Ranch, AZ continued to open the ceremony with comments and prayer. The SOT contingent placed two ceremonial wreaths at the base of the cemetery memorial. One of the wreaths was placed by Robson Ranch AZ residents Karen Furu and John Murphy to honor their fathers who participated in the invasion at Normandy and Robson Ranch Texas resident Mike Simms whose father was a pilot who dropped numerous paratroopers during the invasion. The second wreath was placed by the group as a tribute to the heroes who lost their lives during the invasion. The emotional ceremony was closed in prayer by Jim Galbraith of Robson Ranch, Texas. This very moving visit allowed the SOT group to properly pay their respects to the fallen soldiers.