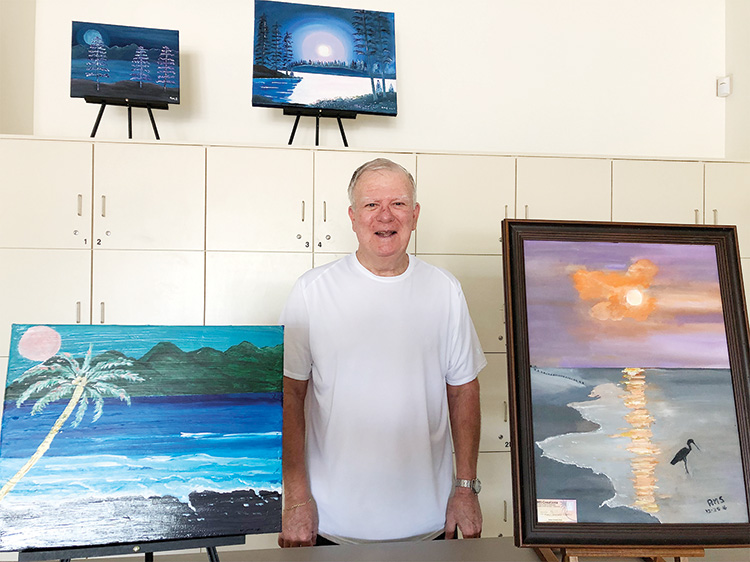 Bob Smith, Artist of the Month

Bob is an oil painter who started painting nine years ago while still working as a vice president of a major furniture company where he was responsible for the recliner division. He enrolled in weekend adult classes given in oil painting at a high school in Pennsylvania where he took eight classes.

When asked why he paints he stated, “I paint for many different reasons. I love the interaction between others, and honestly it’s good, health wise. After being diagnosed with various health issues and, recently Parkinson’s, it keeps my mind stimulated. If it wasn’t for my painting and the encouragement of my many club members and friends, I feel I would have other developing health issues. I don’t consider my paintings gallery worthy for the most part; however, with the help of other members I am constantly learning and hopefully improving. I am proud to be a member of the board of the Fine Arts Guild at the Creative Art Center.”

Bob didn’t start coming to the Fine Arts Guild until Janet Buckingham, now co-president with Bob, encouraged him to join after he retired about three years ago. Until then, Bob was painting at home in the garage during the fall and winters.

I asked Bob if he had any problem mentioning his Parkinsonism. He stated, “It might encourage others with issues to start painting or attending classes since one of the critical issues is how Parkinson’s affects the brain. It’s critical that you stimulate the brain and maintain cognitive functions. Parkinson’s also affects your limbs, such as your hands with tremors. The more you use your hands, the more flexibility you will have.”

Bob’s answer to why he chose oils rather than some other medium was, “I always felt oils were more forgiving, and I could get more dimension with multiple layers, although most recently, I have attempted working with both acrylics and oils even on the same painting as a trial.” Bob has paintings on display and for sale at Studio II of the Creative Art Center. You can find Bob at the studio most Thursday mornings when he volunteers to monitor for Open Studio time.