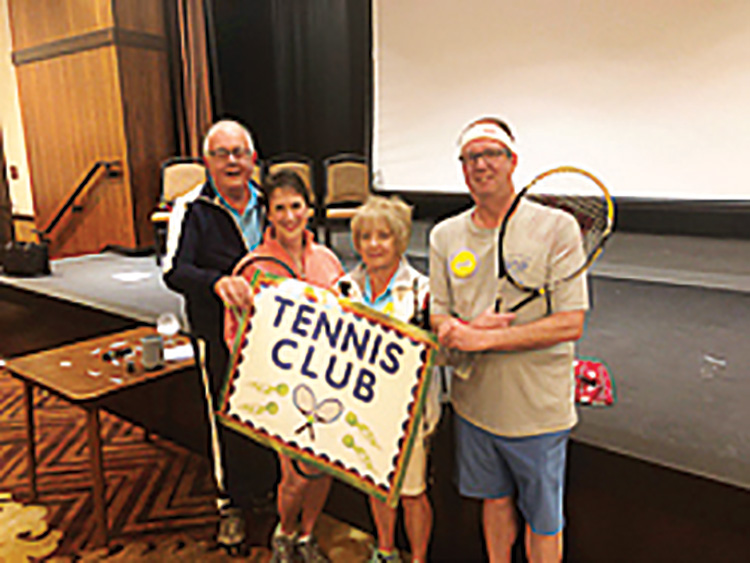 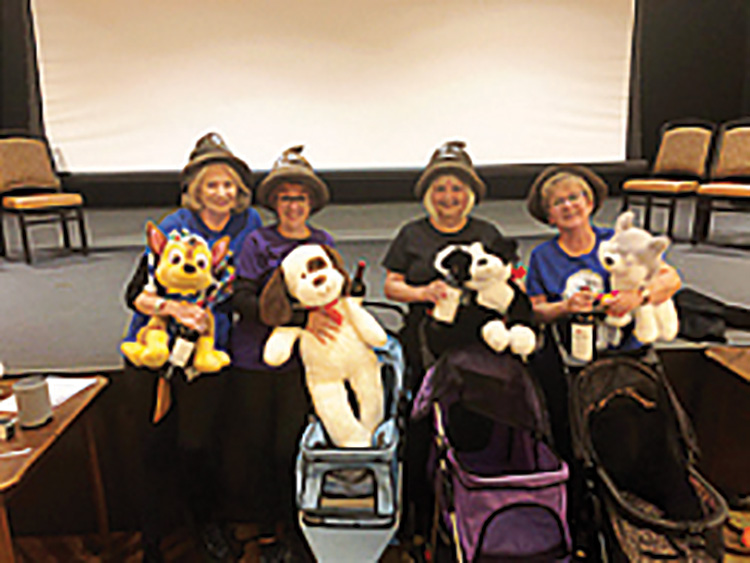 The Winter 2020 MasterMind! Feud Tournament of Champions was held on Feb. 11. It was a scintillating Family Feud-style contest held in the Hermosa Ballroom. A spectacular crowd was on hand to cheer for the eight clubs/teams: Glass Fusers, RV Vagabonds, Book Club, Bowling Club, Thursday Trivia Group, Tennis Club, Dog Park Club, and Support Our Troops. There was a bit of a scramble to find chairs for everyone.

The teams were quite sharp about the most popular responses to various questions. And, yes, the scene included a large electronic game board projected onto a large screen. The teams marched with confidence through the preliminary round, semi-final round, and championship match.

A vocal and enthusiastic audience of over 225 people was on hand to root for the teams. Along the way, phenomenal door prizes were awarded. Seriously, some people went home with great loot.

The RV Vagabonds sported sombreros and other amazing headgear. The Thursday Trivia Group had awesome t-shirts, and accompanying cheerleaders with pom-poms. Not to be outdone, the Bowling Club made a striking impression, including bowling pins!

The Support Our Troops organization touched each member of the audience. Their banner, in the front of the room, reminded everyone about who keeps our nation safe—and those who stand along with those in uniform.

The Book Club was amazing, smart, and showed awesome enthusiasm.

A panel of three honorable judges helped with the event—Don Wilson, Gerri Bradley, and Karen Marfice. They identified the Dog Park Club as “The Most Amazing Team,” an award based upon the team that demonstrated superior creativity, imagination, enthusiasm,  and spirit. It was totally impressive to see the Dog Park Club’s poop hats, dog strollers, and related gear! Their obvious talent was unleashed. The members of the Dog Park Club were Anne Woods, Bobbie McGuire, Deb Maxwell, and Pam Sanders.

A special shout-out goes to the Glass Fusers Club. Generously, they donated sushi meals to the winning team.

The tournament bracket unfolded with  riveting, nail-biting action. The audience was on the edge of their seats at every moment. Eventually, the Tennis Club prevailed in the stunning championship round. Perhaps it is their racket. Anyway, they served up an ace! Game, set, match, and championship. The members of the Tennis Club team were Bob Pomplun, Marsha Oliver, Patti Baumann, and Dave Cannella.