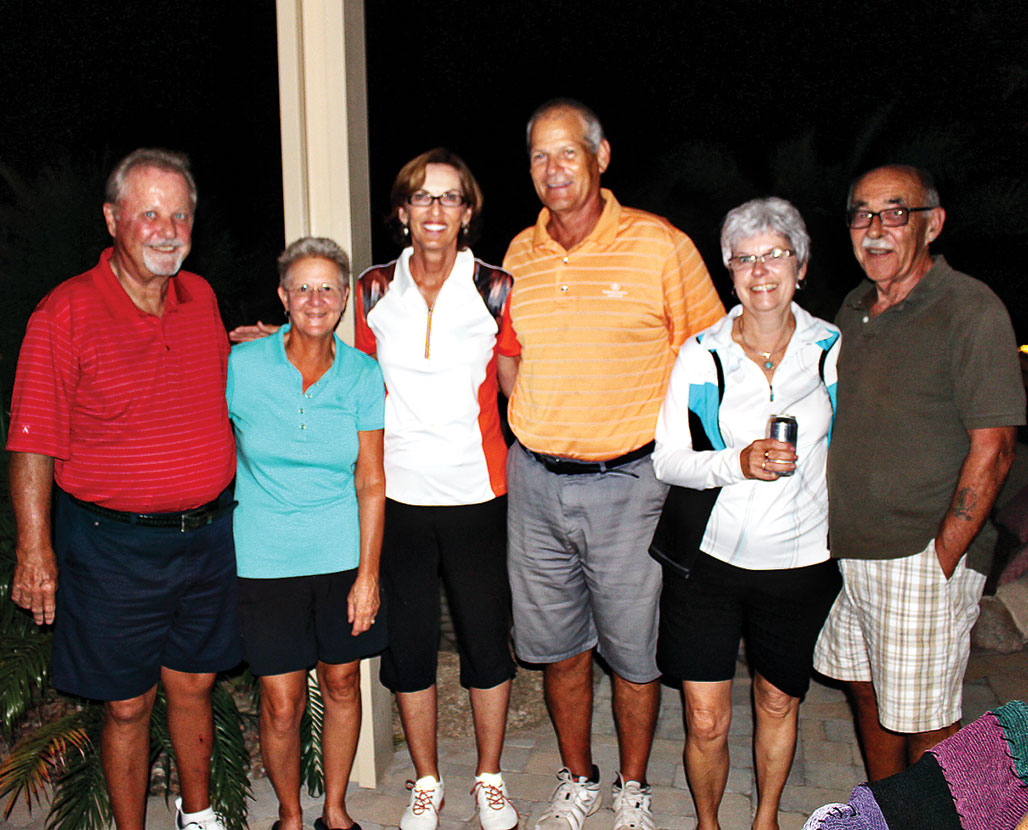 The forecast for Saturday, September 28, was thunderstorms and rain. That afternoon a large dust storm blew through, and it didn’t look like the Glow Ball Golf Tournament was going to happen. But after calls to and from the restaurant and several emails to participants, the event did take place. The weather turned out beautiful for golf, with a spectacular light show of glow balls and distant lightening.

The tournament started about 7:30 p.m. and was played on Picacho 1, 7, 8 and 9; 23 couples were divided into two groups and played an alternate shot “horse race” to determine three winners. Everyone played a one-hole practice round. Then based on their scores, couples were eliminated after each of the remaining three holes. The final two couples from each group played a one-hole second round to determine first, second and third. All ties were broken with a “chip-off.”

For those of you who think golf is difficult, imagine playing at night with only a lighted ball and glow sticks on the flag stick as your target! Yes, it was dark out there. While flashlights and cart lights were used to find the balls, shouts of “turn off the lights” could be heard as people got ready to hit! Add to this the mandatory harassment that occurred. No…glow ball is not the regular golf tournament where spectators are asked to remain quiet; there were people shouting, using noise makers and doing whatever they could to distract those who were hitting! And yes, there were whiffs!

Before golf everyone enjoyed a pizza and salad dinner that had to be moved from the patio to the Sports Center because of the weather. After some initial husband-wife miscommunication between the Burtis, participants finally understood what hole they were to start playing!

Thanks to all who played including those brave first-time participants! And a special thanks to the following:

Heather Hardesty and the restaurant banquet staff. They did a wonderful job serving and accommodating the group at the Sports Center.

Marshals Jim and Kay Moore, Dave Rinaldo and Mikie Simmons for “herding” the groups and keeping everyone safe.

Marv Enerson and Gaile McCuaig for graciously hosting the group at their home after the tournament and to Marv for taking the great pictures!

Randy Cordeman and Dave Marrandette for letting us play on the course (without the water coming on)!