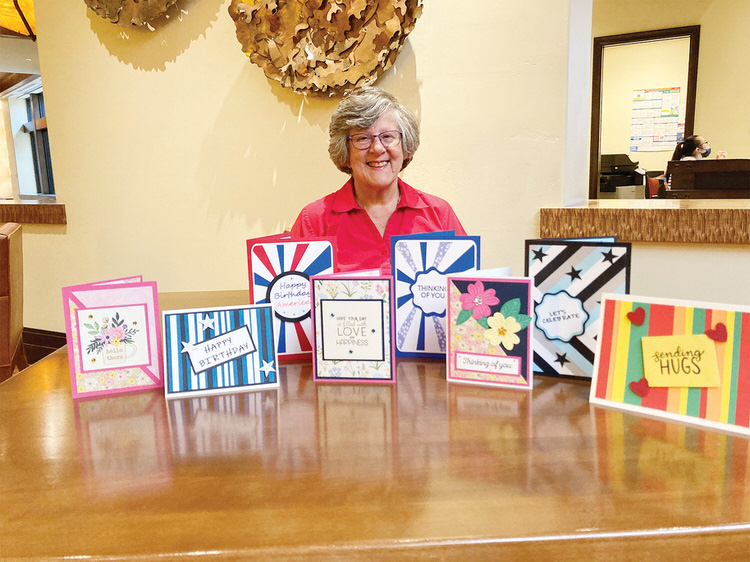 Last April, after reading an article about the Robson Paper Crafting Club in the Robson Ranch Views, Linda Fletcher called Club President Pat Serveiss who encouraged her to come to one of our regularly scheduled sessions. Linda came and felt welcomed. She promptly joined the club.

She had recently begun trying to create her own cards at home. When she retired in 2017 from Edward Jones Investments in Grass Valley, Calif., her boss gave her a Cricut Explore Air machine as a retirement gift. It prints and cuts out images you create on your computer and then sends them to the machine. Linda hadn’t tried to use it and it was still in the box last February when her husband said, “Use it or give it away.” She chose the former. She also purchased some stamps and inkpads and played around at card making, but says, “They were very basic.” Two months later, upon joining the club, she began to work on them in earnest.

Since the club has equipment that she doesn’t have at home, Linda spends much of her time cutting designs with the various dies in our supply closet, as well as stamping designs from our large stamp inventory. These she takes home where she uses them to create her cards.

In addition to what she’s learned from our offered classes and the expertise shared by other members, which she says is so welcome and helpful, Linda watches videos on YouTube where people demonstrate different types of cards. She even subscribes to a demonstrator’s station. With a subscription, she has access to step-by-step instructions in addition to watching the creation of the card on video. Without those written instructions, it is necessary to pause frequently, sometimes to re-watch a particular step one or more times until you figure out exactly what you need to do. In the two months that Linda has been actively working on her handmade cards, the improvement in her technique is quite obvious. She’s even been invited to lead classes on some of the cards she’s made. Her daughter believes the quality of Linda’s cards is high enough that she could sell them.

Linda said she previously tried her hand at stained glass projects, but found it intimidating. She worried about handling the glass and feared burning herself with the soldering iron and found that “Paper crafting is right up my alley.”

Finding that she’s making more cards than she has people to whom she can send them, she likes that our group has so many charitable groups to which we donate cards. She also learned that the company Stampin’ Up! welcomes people’s handmade cards, which they also use to donate to hospitals and other charities.

Linda closed out our interview by telling me, “I’m so glad I contacted Pat. I am naturally shy and quiet, but I enjoy being around the Paper Crafting Club members. You’re all so fun!”