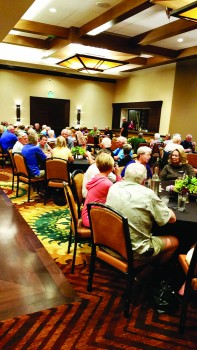 Immediately following dinner Betty Murphy, GM, hosted a beer focused trivia game. Each table competed as a group, and each guest at the winning table received a bottle of wine. At one point resident Bob Burton spontaneously broke into a verse or two of a beer drinking song and then was assisted with the remaining verses by another homeowner’s mother visiting from Pennsylvania. At the conclusion of the evening, guests left with a far greater knowledge of beer than they came with (or perhaps ever wanted!)

The Oktoberfest tradition started in 1810 to celebrate the October 12 marriage of Bavarian Crown Prince Ludwig to the Saxon-Hildburghausen Princess Therese. The citizens of Munich were invited to join in the festivities, which were held over five days on the fields in front of the city gates. The decision to repeat the festivities in the subsequent year gave rise to the tradition of the annual Oktoberfest, which is celebrated around the world and typically begins in late September and ends in early October.

*In German “prost” means “cheers,” as a salutation accompanied by beer.